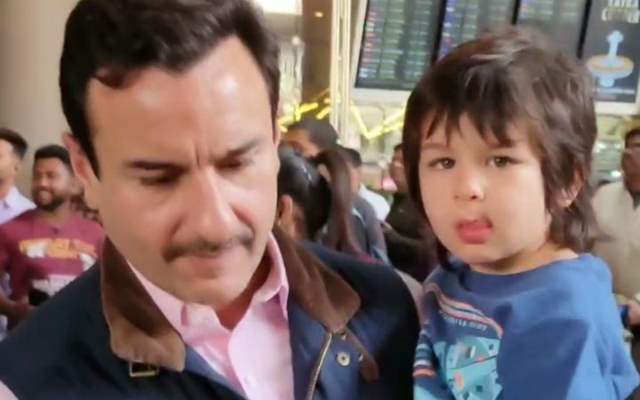 Saif Ali Khan and Kareena Kapoor Khan's son Taimur Ali Khan is the apple of everyone's eyes and the little munchkin already has a massive fan following who an give any young gen actor a run for their money. But, along with Tim, its also his parents, Saif and Kareena who are loved and adored by many fans across the globe.

However, things tend to get messy when the fans cross their line and enter a star's personal space! Something similar happened with the Pataudi family when they were returning home from their vacations.

It so happened that when Kareena, Saif and Taimur were heading home from the airport, they were mobbed by fans who wanted to click a selfie with the star family. Taimur who was walking holding his Abba's hand too was not spared and fans started mobbing him to click a picture with him.

This rowdy behavior by the fans irked Saif but he somehow controlled his anger as he had to take care of his little man. So instead of yelling at the fan, Saif picked Taimur, took him in his arms and walked off. Not only Saif but even Bebo too was miffed looking at the chaos. But, both of them did not utter a single word and kept walking.

In the video that went viral, Saif had to carry Taimur considering the huge crowd that followed. He was even seen putting a man's hand down who forcibly tried to take a picture with the actor.

During this time, Saif and Taimur walked ahead and Kareena was left behind. The media photographers were also fumed because of the people as they were unable to take pictures of the celebs that brought a hindrance to their work.

Saif had earlier mentioned in an interview that Taimur doesn't appreciate been clicked. He said, "He's like, 'No picture!' And he starts frowning. He doesn't like too much fuss. It's not something he is excited about, for sure."

"But on the other hand, in a positive way, he does seem to make people happy. And he makes me very happy because he is a cute kid. So I get it... because it's an outpouring of affection and love. But unfortunately sometimes, in some public places when he goes to school, sometimes it can get a little crowded and that's something he has grown up with. And it's not something that many of us enjoy, but what to do?" he added.

On the professional front, Saif and Kareena are both doing fabulous in their career, Kareena is all smiles with the success of 'Good Newwz', which also stars Akshay Kumar, Kiara Advani and Diljit Dosanjh. Saif is been applauded for his role in Tanhaji: The Unsung Warrior starring opposite Ajay Devgn and Kajol.

Sanjay Dutt's Official Statement after being Rushed to the ...
9 hours ago