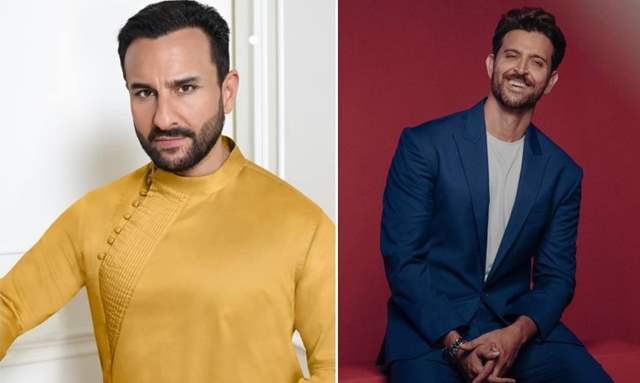 Saif Ali Khan is all praises for his co-star Hrithik Roshan who is all set to star with him in the Vikram Vedha remake. In the Hindi remake of the hit Tamil film, the two will be seen together for the first time in 19 years. Saif and Hrithik previously appeared in 2002's Naa Tum Jaano Na Hum, starring Esha Deol.

When asked about reuniting with Hrithik, Saif told Pinkvilla that his role in Naa Tum Jaano Na Hum was minor. He also expressed excitement about working with Hrithik in Vikram Vedha's remake, which he described as a "fabulous film."

We have read it a few times, and it’s going to be a very challenging film. Hrithik is a guy who I think is a phenomenal actor, looker, and dancer. He is a general force of cinema, so I have to get up early and pull up my socks

During the interview, Saif was joined by Arjun Kapoor, his Bhoot Police co-star, who joked that Saif's dancing skills are no match for Hrithik's, to which Saif replied, “Yeah, or else I would not have done the film. No one would make the two of us dance until and unless they want to make a strange movie.”

Talking about work, both the actors are bagged with films. Hrithik’s upcoming movies include Fighter, in which he co-stars with Deepika Padukone, and Krrish 4, the fourth installment in the Krrish franchise. Following Bhoot Police, Saif will appear in Bunty Aur Babli 2 alongside Rani Mukerji and Adipurush alongside Prabhas and Kriti Sanon.