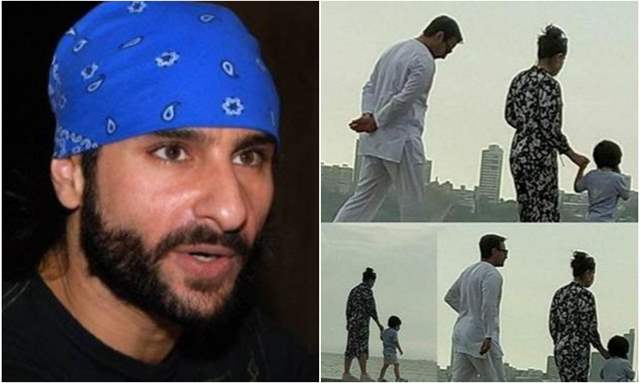 Few weeks ago, Saif Ali Khan and Kareena Kapoor Khan stepped outside their house with their 3-year-old munchkin, Taimur Ali Khan. The family made a visit to Mumbai’s Marine Drive to get some fresh air as they had been staying indoors for months because of the lockdown.

A video had also gone viral from their little outing. However, the Pataudi's were trolled for not wearing masks amid the coronavirus outburst in the nation. In the viral video doing the rounds on the Internet, a Policeman could also be heard telling Saif that kids were not allowed to step outside due to the risk of the virus.

When asked about the trolls bashing them for allegedly being irresponsible and not wearing masks while stepping out with a toddler, Saif Ali Khan told Mumbai Mirror that they had their masks with them and had just removed it when they found no people around. And when they saw people coming in, they put on their masks and drove away.

Saif said, “But as soon as we saw there were people and were told children were not allowed out, we put on our masks and drove away. That was not reported but it’s a fact that we have been responsible, law-abiding citizens and stayed home all through the lockdown and even now only interact with a few family members.”

In other news, Saif and Kareena are all set to move into their new house, which is bigger than the one they currently reside in. In the same interview, Saif revealed that he has been overlooking the renovation of the new flat, that is exactly opposite to their house and which is why he was often spotted there.

Also Read: Saif Ali Khan, Kareena & Taimur Moving Out Of Their House to A Bigger Apartment; Details below

On the work front, Saif Ali Khan will be seen in the sequel of Bunty Aur Babli with Rani Mukerjee, Siddhant Chaturvedi and Sharvari. He also has a cameo role in Sushant Singh Rajput’s Dil Bechara.

Directed by Mukesh Chhabra, Dil Bechara marks the last film of Sushant and will release on  Disney+Hotstar on July 24 for all subscribers and non-subscribers. Dil Bechara is the official Hindi adaptation of Hollywood film The Fault in Our Stars, adapted by John Greene's novel by the same name and marks the debut of Sanjana Sanghi.

Payal Ghosh To File Official Complaint Against Anurag ...
39 minutes ago