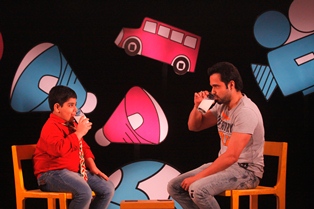 The little kid who is 8 year old Sadhil Kapoor has already carved a niche for himself on the television circuit. The young host has interviewed the biggest and best names form the industry for Disney Channel's celebrity chat show 'Captain Tiao', ranging from the superstar Salman Khan to the Bollywood's young heartthrobs Parineeti Chopra, Arjun Kapoor, Ayushmann Khurrana.

The little one has interviewed all the stars like the perfect host and became a star in his own right. This time around the chat becomes more drilling as the charming host welcomes fun-loving actor Emraan Hashmi on the sets of Captain Tiao.

Sadhil not only gets the delightful opportunity of talking to Raja Natwarlal' but also gives the actor few advices on his dance moves. While on the sets of Captain Tiao Emraan takes the pleasure of telling Sadhil about his childhood days and taking party and dance tips from the young host.

Captain Tiao' is a first of its kind short format talk show conceptualized keeping in mind the curious nature of a child and the intriguing questions that children never hesitate to ask. The show presents Sadhil Kapoor as the host 'Captain Tiao' who with his mind bending questions get celebrities to reveal some unknown and interesting facts of their lives. This recently launched show continues to bring to life Disney Channel's promise to Express Yourself, Believe Yourself and Follow Your Dreams with its new refreshing concept.

9 years ago she looks uncomfortable...her pose is odd, almost like they caught her in between poses...well she is pretty at the least

+ 2
9 years ago love u kajal...looking gorgeous as always.

9 years ago I like this cover but i don't like her pose it looks quite stiff and awkward to me.

+ 2
9 years ago This was a phenomenal and inspiring movie!
It was amazingly directed, the action was sensible, it used the power of media to convey an important message, and it did waste my time.

Kajal Aggarwal has acted exceptionally well!
She is very talented!

+ 5
9 years ago Thanks for the article.. looking forward to seeing the movie, since tamil one rocked *