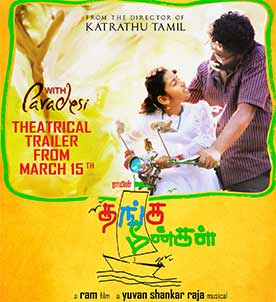 Sadhana, who won the National Film Award for her performance in Tamil drama "Thanga Meengal" as the best child artist, has dedicated it to director Ram. She says she would be indebted to him for giving her an opportunity.

"There are so many people to be credited for this award, but director Ram deserves it more. I would like to thank him for giving me a chance to act and I'll be indebted to him for that. His trust in me since the beginning of the film helped me to achieve this award," Sadhana told IANS.

"Thanga Meengal", which also bagged Natiomnal Awards for the best film and best lyrics, is the story of a relationship between a father and his daughter. According to the jury, Sadhana has carried her part of a dyslexic child with sensitivity and exuberance and yet with ease.

"Director Ram and I behaved like father and daughter on sets. He's like a father to me and I'm his daughter," she added.

Sadhana shared the award with Somnath Avghade, who has been appreciated for his role in the Marathi film "Fandry".