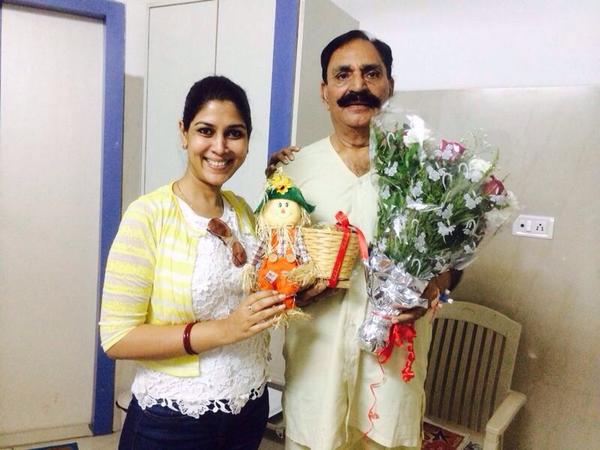 'A friend in need is a friend indeed' this proverb suits our TV celebs quite well because in their tough time their friends help them kindly. One such actress who proves to be a good friend is versatile Saakshi Tanwar who was last seen in Sony TV's Bade Acche lagte Hai as Priya. Saakshi recently gave a visit to Kavita Kaushik's ailing father. Her gesture indeed pleased Kavita a lot and she was quite content to see Saakshi offering a helping hand to Kavita for her father's speedy recovery.

Kavita Kaushik who is seen in SAB TV's F.I.R had to manage both shooting for her show as well taking care of her father's illness.

To thank Saakshi, Kavita tweeted that ,"This angel has been running around for dad exchanging hospital duties whn Ive to shoot,all think shez th daughter too."

That's indeed a sweet gesture from you Saakshi.

We wish all goes well for Kavita!

luvsakshi 6 years ago Missing you soo much , love you sakshi ji , please come back soon .
With bang ... Love you
you are a down to earth person..
come back soon please

leena04 6 years ago From last 15 years I m admiring Sakshi ma'am & with each passing moment the respect in my heart for her only getting incresses & I really feel proud to be her fan she is great persona & beautiful human being & I always pray for her well being & wishes her for happy life... really she is great & too gud...

luvsakshi 6 years ago She is a great human being ..
im proud of her
love her so much

Missing you ..come back soon please

Missing you ..come back soon please

bpatil3 6 years ago She is an angel really, respect her 4 valuing relations who nit only speaks of the human vakues but proves.
Luv u the most sakshi

Chitra89 6 years ago Love Saakshi Tanwar. She is the best and a very nice human being!

Catgol 6 years ago Want to see you back on TV soon, missing you loads!!

peeyara 6 years ago A friend in need is really a friend in deed :D
i so love Sakshi for her nature n values &lt;3

SanjanaS. 6 years ago Aww so sweet :)
She's such a darling!