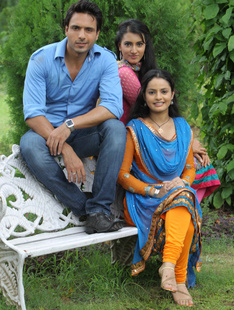 Zee TV's Sanjog Se Bani Sangini is on its verge to see a big shocker in the coming few episodes with a major twist which will bring another wave in Gauri's life.

A little birdie from the sets informs, " Today we are shooting the scene where Rudr (Iqbal Khan) and Gauri (Binny Sharma) go for a picnic to spend some gala time together. But unfortunately, Ram (Vikas Bhalla) arrives in between and asks Rudr about the  lent money. Later on  their talks mount to a bad argument."

"In between Ram asks Gauri to have a word with him alone as he is still has feelings for Gauri. Seeing this, Rudr runs towards the cliff where Ram and Gauri are together, and in a tiff Ram accidentally pushes Rudr and unknowingly Gauri too, from the cliff, "adds source.

That was not all enough to happen in the life of Rudr-Gauri, as Ram throws a huge rock on them and Gauri will be shown dead in the freeze of the episode. However, Gauri gets saved and Rudr gets badly hit by the rock that he loses his partial memory.

We too hear that Rudr will loss his memory where he will recognize only Pihu (Additi Gupta) and will forget all other relations. In future he will even start thinking Pihu's  kid to be his child.

We tried contacting Binny Sharma, but she remained unavailable for her comments.

Iqbal says, " I really don't know what will happen; it could be either me alone falling from the cliff or everyone together. I am really clueless about the track."

Additi Gupta says, "I am not shooting since 5-6 days so I am really aloof from the track happening."

pihu07 9 years ago Keep smiling Additi...wishing you all the best!...

iheartChai 9 years ago May you continue to receive great success and may no evil eye fall upon you.

Keep smiling and rocking it!

lamaa 9 years ago Keep smiling Additi :) Waiting to see you back!

lamaa 9 years ago Will miss Pihu
All the best Additi :D

blueocean_787 9 years ago Additi darling your the best! Love you sooo much