Sony's adventure based reality show, 'Iss Jungle Se Mujhe Bachao' on the lines of the popular UK based show, I'm a Celebrity, Get Me Out Of Here will launch on 6th July.

The names of the celebrities who will be thrown into the jungles of Malaysia has been kept under wraps, but our source has dug out few names who have been approached.
"Ruby Bhatia the popular television personality who was a VJ with Channel [V] has been approached for the show. Another name that is floating around is of the item girl, Deepal Shaw who is popularly known as Baby Doll. Deepal started her career as a model and then turned to be a singer. She made her acting debut in Mahesh Bhatt's controversial film Kalyug", informs our source.

"Karan Wahi, the young lad of Remix fame who is presently seen in the COLORS show Mere Ghar Aayi Ek Nanhi Pari has also been approached for the show", adds our source. 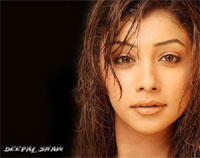 However, when we called up Karan he accepted that he was offered the show, but is not doing it. "Yes, I was offered the show. I would have loved to do this show, as it throws you into the jungle. Unfortunately, I cannot do it as I cannot move out of the country as I am doing a daily soap on COLORS".

Few other big names who have been approached are Faizal Khan brother of Aamir Khan, Adnan Sami's wife Sabah and the Bollywood sexy siren Antara Mali.

The show will also see the comeback of the very talented host Mini Mathur to Sony Entertainment Television. Mini had hosted the first three seasons of Indian Idol. Recent reports had mentioned that popular actor and host Hussain Kuwajerwala has been tipped to co-host the show along with Mini. But the latest is that Yudhister the VJ turned actor will now be hosting the show.

As we had reported earlier, Shweta Tiwari and Mouli Ganguly are also tipped to be part of the show as contestants.

helmet 11 years ago looking forward to the show!!!! but india needs some originality, really... anywayz good luck 2 all the contestants
thanxxx

*Shruti* 11 years ago Glad to see Mini back hosting the show. Looking forward to the show!!

Pyari Pari 11 years ago It will be interesting to see another brilliant UK show being destroyed in India.

aparna_1988 11 years ago i really wish he should have accepted

GetbusyLiving 11 years ago it would have been awesome to see karan wahi in this show...we could hvae known d real him...anyways i am also happy he turned it down...if this is anything like big boss..it would have just shown d worst side of him..lolz

bary 11 years ago there should be some guts to go to a show like this,i wish it is more like fear factor,some thing wild in indian telivision will be a different essence
wish all contestants luck

potterish 11 years ago nice... i like karan wahi, i wish he had agreed

Bigg Boss 14: Rahul Vaidya asked to walk out of the show