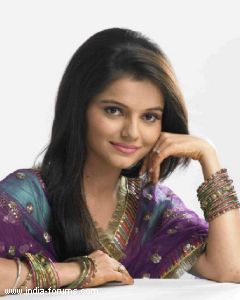 The next time SAB TV's lovable character Jeannie' of Jeannie Aur Juju fame, emerges from the magical bottle, her fans will be in for a pleasant surprise! Dressed in the customary Jeannie attire, the beautiful & vivacious, Rubina Dilaik, will be seen casting her spell as Jeannie in the fantasy world of Jinland!

Rubina Dilaik, one of television's most lovable bahus, will be mesmerizing the audience once again as the new charm of Jeannie Aur Juju. The favorite of millions of fans across India, Rubina will be keenly followed in her new role as the bubbly and naughty Jeannie, as she brings her effortless charisma & adds more fun and mischief to the lovable character.

Mr. Anooj Kapoor, EVP and Business Head, SAB TV said, "This is an extremely popular show ever since we launched it last year. Families across India, especially kids, are fascinated by the magical world of Jeannie & we hope that Rubina will continue to cast her spell & bring alive the endearing charm of Jeannie."

An ecstatic Rubina Dilaik said, "The concept of Jeannie Aur Juju appealed to me greatly as I am a big fan of fantasy based shows. This show is another glorious feather in my cap, its very different from the kind of genres I have done before. Also, working with SAB TV family is an extremely enticing experience! I hope my viewers will appreciate my new avatar as I give Jeannie' my own magical twist."

In the forthcoming episode Jeannie will be taken hostage by the extremely powerful Jin Junnon' from Jinland who plans to sacrifice her in order to attain additional powers. Vicky takes on the impossible task of traveling all the way to Jinland to save his beloved. However, the all-powerful Jin Junoon has other wicked plans up his sleeve. Jia and Johny too will land up in Jinland, and they realise that the only way they can now get Jeannie's life back is through an elixir, i.e, 'sanjeevani booti'. Vicky then sets off on a mission to get the elixir for Jeannie, an elixir that will not just save Jeannie but also give her an all new identity. Catch the magic of Jeannie in Jeannie Aur Juju on SAB TV.

+ 3
7 years ago You are doing great justice to your new role, Rubina Dilaik

+ 2
7 years ago Rubina all the best for your next venture! Looking forward to tomorrow in this new avatar Jeannie!

7 years ago Rubina Dilaik, waiting for Monday for the show

7 years ago Waiting to see you yet in another role.you are the best Rubina Dilaik
.