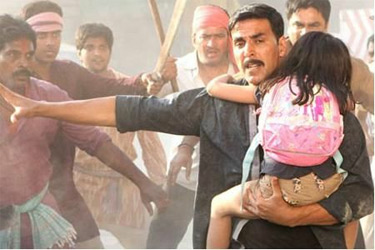 has had a compelling start. The film has earned Rs.15.10 crore on the opening day, making it the third biggest opening of all times, after "Agneepath(2012)" and "Bodyguard". It also happens to be the biggest non-holiday opening of all time.

"Agneepath(2012)" and "Bodyguard" earned Rs.25 crore and Rs.22 crore on the first day of their release, respectively.

Directed by Prabhu Deva and co-produced by Sanjay Leela Bhansali and Ronnie Screwvala, "Rowdy Rathore" marks the comeback of Akshay Kumar in a full-fledged action role after seven years. Made at a budget of Rs.45 crore, the film opened across 3,169 screens Friday.

"It is also Akshay's biggest opening day ever. All of us - 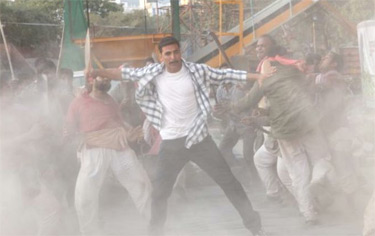 "The first day response to the film is phenomenal. We have had 82 percent occupancy, which normally doesn't happen on Fridays. We expect a record number of occupancy over two days," Gautam Datta, COO, PVR Cinemas, told IANS.

"It is a very entertaining film, a typical Akshay Kumar film. The best part is we can see families coming to watch the film. It doesn't cater to a specific audience," he added.

Piyush Raizada of Delight Cinemas of Delhi also says all their shows are going house-full.

"'Rowdy Rathore' is a complete masala movie. People are really liking the film as it is for the masses. You get a natural smile on your face when you see it. Our shows are going house-full and the film is likely to pick up with word of mouth publicity," Raizada told IANS.

Ronnie Screwvala's advice and his influential words make him a ...