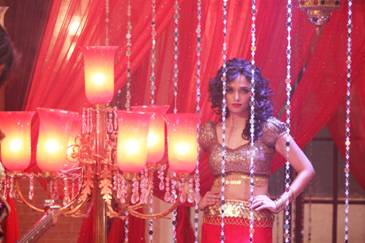 While the actress carried off their looks from the movies Rajjo and Zanjeer with ease, the actress seemed quite comfortable playing their parts too.

Mimicking the two Bollywood sirens in a hilarious spoof that had various other mimicry artistes like Rajesh Kumar, Kunal Kumar and Mubin playing the bigwigs of Bollywood, Roshni was seen playing a double role of Priyanka and Kangana. The half hour special will be a hilarious spoof about various actors trying to get a King to nominate their movies. While they are all in a King's court trying to convince him to nominate them for Zee Cine Awards 2014, the King finally announces the nominations for Song of the Year, Best Actor - Male, Best Actor - Female and Best Film.

Speaking of her spoofy act, Roshni said, "It was a lot of fun stepping into the shoes of Kangana and Priyanka as they are both glamorous style icons and such ravishing women with their own individual adaa and andaaz. There was of course a comic element to my avatars of the two divas as the idea was to spoof their styles. I hope the audience likes my look and laugh out loud."

Requesting the King and his Minister to nominate Zanjeer and Rajjo for various categories, Roshni Chopra's tongue-in-cheek humor was loved by everyone on the sets. Bringing in fun and laughter this weekend, Roshni and others will have the audiences in splits mimicking various artists.

Nishant Malkani: I may not agree with everything Kangana says but what ...

shivangi278 9 years ago leave them alone...
SKPC rock...:)
if the article is true...then also there is nothing to worry,
kehte hai na ki "ladai karne se pyaar badta hai" ;)

Summer3 9 years ago Ah a lover's quarrel. How sweet, but I am sure they can work things out.

larki_punjaban 9 years ago the media always need some new stupid masala
dont have actors the right to have a personal life?....

zara_11 9 years ago I seriously hope Shahid and Priyanks work things out, i think we all should just leave them alone- especially the media.

irene_c 9 years ago They are so cute hopefully they. Make up n resolve any issues

MuasamSept16th 9 years ago Apparently, the source for all this inside info is a "friend" .LOL. How can the media claim to know whether a couple talked to eachother on a certain day or not. Funny.

LMAO at the people who think they are not in a relationship. Like really u've gota open your eyes.

halley 9 years ago i love them both together!!!they make a cute pair!pls patch up!

Riyaa147 9 years ago Good. They dont look together and i thought they arent dating? Shahid is not in love with her. Bollywood is so confusing at time but its better if they break up

Bhavini Purohit to be a part of Saath Nibhana Saathiya 2?
8 minutes ago

Urmila Matondkar Does Not Regret, But Ready to Apologise for ...
30 minutes ago

Shabana Azmi speaks about recovering from her Devastating ...
53 minutes ago

Who is AK in Sushant's Unseen Video that has Surfaced? Watch ...
57 minutes ago