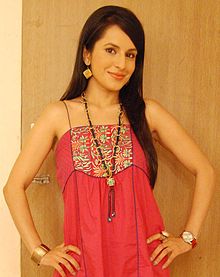 The charming actress Roop Durgapal (Saanchi) from Balika Vadhu on Colors was recently unhappy with the whole idea of settling in a small town with Jagdish (Shashank Vyas) because of which their marriage was called off in the show.

Just like Saanchi there are many others who believe that they are not ready to marry into small towns. TellyBuzz got in touch with Roop to know her views about the same. When asked if she would prefer a small town guy for marriage in her real life or not she comes out with a gutsy answer and says, "Practically it's not possible. It's difficult to adjust with a village guy if you are born and brought up in a city. I don't think I can marry a guy from small town."

We admire Roop for her outspoken and honest attitude since most of the urban born and bred girls would agree with the fact that village guys are more conservative as compared to city guys who are educated and consider men and women equal. Roop goes on to explain, "Every relationship needs love, passion and loyalty and I feel village guys sometimes tend to not give the girl what she deserves."

However, at the same time Roop has some good things to say about the village folk, "I feel village guys are extremely simple in nature and their simplicity and way of living is something good about them."

"But guys from the city are very smart and educated so they treat woman with respect and consider all women and men to be equal. In villages men sometimes don't know how talented their women can be so they often tend to underestimate them."

We are sure that many of our urban girls will agree with Roop and we hope that Roop finds her real life partner as soon as possible. Till then keep reading TellyBuzz for more such updates.

7 years ago First of all, i congratulate the cvs for their selection of sanchi's role. I am sure that no one can do sanchi's role perfectly except roop because it suits her character offscreen. Next moving to her comment, if she doesn't want to marry a village guy,
then she dont want to marry that guy. It's her wish and its her life, she can take any decision in that but talking bad about village guys is not good. who said to her that village men are not educated. village people are also educated. For her kind information, people from small town are also smart and broad minded, they too have achieved a lot than urban people and for example Dr.A.P.J. ABDUL KALAM, RAJINIKANTH, our own most loved and respectful SHASHANK VYAS and KAPIL SHARMA are from small town. They have achieved a lot. On my part i would say education is meant for improving our knowledge. By improving our knowledge we should
improve our character. everyone are same(i'm not saying the appearance) with two legs, hands, brain, heart and everything. village people respect women more than others(eg.jagya,bhairov of bv). nowadays only it is divided as city and village but go back to the India before freedom, everyplace is same. think of the freedom struggle, the freedom fighters are mostly illiterate and they are from the place which is now designated as village yet they are the people who got freedom for our nation. As i'm from tamilnadu i'm saying a well known person from our state who is illiterate yet he did so many welfare activities to improve the condition of the state prevailed that time as CHIEF MINISTER of tamilnadu, he is only KAMARAJ. Though he is illiterate he helped for the education of children and also respected women more than anyone can. Above all i commented only because of shashank vyas name is tagged here and finally DON'T UNDERESTIMATE THE POWER OF A COMMON MAN(especially village guys).
Shashank, you are doing well, keep it up.
editDate>2013-12-27 13:50:36...

7 years ago why is she still in balika vadhu? oh yes she just stands in the back giving minor expressions on a scene. right right.. well roop hmmm village guys and girls are not any lesser than city guys and girls... whereas i would want to say that city girls like for example you are a bit stupid who say stuff like this and make a fool out of themselves. Thank You...

7 years ago perfect selection by cvs for sanchi role...she must understand reality before she speaks... she dnt knw nw village guys/girls are well educatds like doctors, engnrs etc... if she dnt like to marry village guy, its her wish ...who cares... let her go to hell...

7 years ago Very generalized statements given by Roop. Roop has just started her career and she should watch out what she speaks. The sooner she learns that people will judge her from top to bottom based on what she speaks in such interviews, the better.

It is not about who is better. It is about how different the lifestyles and habits of village vs city people can be. The village people might find it as difficult to marry city people all because of the difference in lifestyles.

+ 3
7 years ago oh really!!!! girl if u dont know about villages why speak. Lal Bahadur shastri was a villager. APJ abdul kalam was a villager and here u are a gawar and consercative not us.

+ 2
7 years ago She is one delusional girl. Not sure to her what village is? Grow up girl you need a lot of reality check. Not everything is the way it is shown in TV serials.

+ 6
7 years ago It is nice to see "educated" people exhibit their intelligence. ROFL!

+ 2
7 years ago She wants to marry a city guy no issues but she has no right to give such insulting comments on village and small towns guys I have many guys in my class who came from villages to study and they all are simple , polite , broad minded , cultured so respectful and helpful to girls I don't find them any way less

and TB correct your information It was Jagya who called off the marriage because Sanchi was not fit to be Singhs DIL She was Lair , cheater who was cheating them She never called off her marriage

7 years ago Is she serious?? OK, I may agree that guys from small town or villages are conservative (nothing wrong with that really!!), but city guys are all that she is saying... not all of them... every man becomes possessive about his wife or gf... and sometimes it is not a bad thing, as long as it doesnt interfere with the girl's life, work etc... but every girl has to bring some changes in her lifestyle too... I used to party with friends before marriage... but now that I have a kid, I am not going to leave my child and husband home and go out partying... I rather spend my time with my family... not just a girl... a guy should try to bring changes in himself too in order to balance their life... thats all...