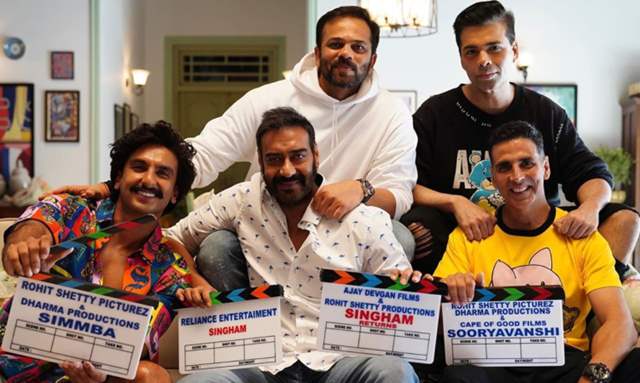 Rohit Shetty's cop series have made a huge impact in the audience. Started with Singham starring Ajay Devgn, the director introduced Ranveer Singh as Simmba and his currently gearing up for Sooryavanshi that will introduce Akshay Kumar in Shetty's cop world. The film-maker had already showed a small snippet of Akshay as a cop in the ending of Simmba, which has increased the curiosity of the fans for watching Akki in the khakhi vardi.

While interacting with Mid-day, Ajay revealed the possibilities of a merger of all the three iconic characters under one banner. He said, "Singham and Simmba have become desi superheroes, and I am sure Sooryavanshi will get there too. So, Rohit is building this interesting universe, which hasn't been seen before in Indian cinema. We plan to make a film featuring all three of us. There needs to be a right script. The team is still building on it."

It will take some time for the director to build this project and bring some of the most loved actors together, but it will definitely be a treat to watch. Amongst this, Rohit Shetty's animated version of Golmaal Junior targeted towards children is all set to release on the 13th of May, 2019 on Sonic at 1:30 PM.

3 years ago Theeran is one of the super hit movie in tamil and based on true events. I do hope the film does good in Hindi too. All the best to Akshay Kumar and the team.