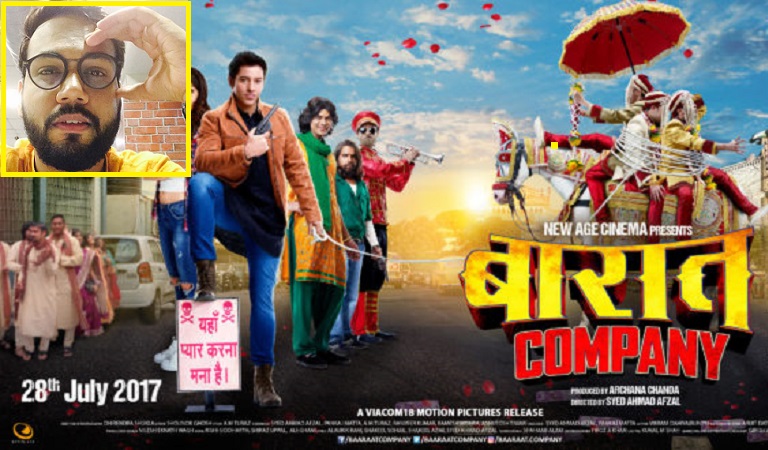 Rohit Bhatnagar is all set for his debut movie, "Baaraat Company". The film's trailer that was recently launched has already received more then 2 million views.
The trailer is receiving rave reviews from all around and has become the talk of the town owing to its fully entertaining content that it has to offer.
Watch the trailer here:

Directed by Syed Afzal Ahmed, "Baarat Company", is a rom-com based in Lucknow where strict rule of *"Yaha pyaar karna mana hai"* applies.
The trailer of the film has a fresh vibe and an interesting take on arranged marriages.
Starring Sandeepa Dhar, the film introduces Ranveer Kumar in the lead and is produced by Archana Chanda from New Age Cinema and distributed by Viacom 18 motion pictures.
After directing films that dealt with youth in politics, "Youngistan" and blood mafia, "Laal Rang", director Syed Ahmad Afzals is now experimenting with a rom-com but in his rooted style which comments on the social context of the story.
Baraat Company is shot in lucknow in real locations. The film has a thought-provoking subject that will appeal to the sensibilities of all age group.
The film also features  Anurita Jha, Vishal Karwal, Rajender Sethi, Anil Rastogi, Jai Hind, Saurab Kumar, Abhimanue Arun, Manish Nawani, Lekha Prajapati and Rohit Bhatnagar. The movie is slated to release on 28th July, 2017.
0 Likes

Celebs talk: Nepotism is everywhere, it's wrong to target the film ...

Father's Day Special: Celebs Talk about the influence of their Fathers ...