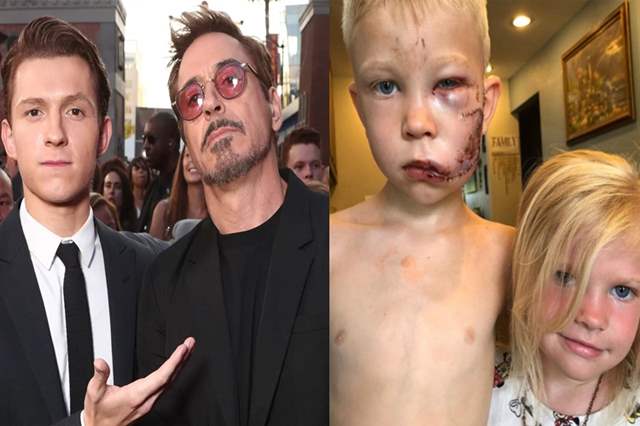 The past couple of days has been about a couple of images that show a little boy and his younger sister in a before and after picture which shows how the brother is injured and has 90 stitched as he suffered several bites to his head saving his sister.

Since then, the Internet has poured in with a lot of love and support for them including Chris Evans who sent him his real Captain America shield.

And now, Robert Downey Jr. and Tom Holland have joined their “Avengers” castmates in speaking with 6-year-old Bridger Walker. Bridger’s aunt, Nicole Noel Walker, first caught the attention of Captain America actor Chris Evans with an Instagram post on July 12 in which she tagged several “Avengers” actors. Walker asked them to provide words of encouragement to Bridger. Ever since, Walker has documented each conversation between the celebrities and Bridger via social media. In a video message to Bridger, Downey Jr., who plays Iron Man, attempted to one-up Evans’ gift.

“Bridger, you’re a rockstar,” Downey Jr. said. “I hear [Captain America] sent a shield your way. I’m going to do one better, you call me on your next birthday. I’ve got something special for you.”

Spider-Man star Tom Holland hopped on a video call with Bridger, who dressed up in full Spidey garb.

“I want to say you are so brave, mate,” Holland said. “We are all so proud of you, and your little sister is so lucky to have someone like you.”

Holland then invited Bridger to come to set during the filming of the next “Spider-Man” film.

“We’re going to be shooting ‘Spider-Man 3’ and if you ever want to come to set and hang out and see the Spider-Man suit up close, you’re always welcome,” Holland said.

“People who put the well-beings of others in front of themselves are the most heroic and thoughtful people I know. I truly respect and admire your courage and your heart,” Ruffalo wrote. “Real courage isn’t dominating people or fighting against people or walking around like a tough guy. Real courage is knowing what is right to do and doing it even when it might end up hurting you somehow. You are more of man than many, many I have seen or known.”

Avengers assembled for the best thing possible, isn't it?

Salman Khan looking at a Republic Day release for upcoming ...
27 minutes ago

Kangana Hits Back at Aditya Thackeray's 'Dirty Politics' ...
9 hours ago