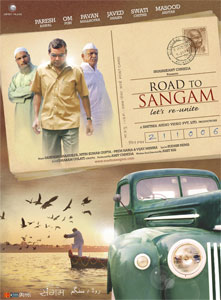 Comments the producer Amit Chheda, "It's been a constant pleasure for us. Everywhere that we have gone, we have come back with appreciation and awards. When we had decided to back this project, we knew that it will be a good film, but it has surpassed our expectations."

Road to Sangam, a film inspired by Gandhiji and his principles, has received 3 awards in three different international film festivals. The first award it won was the 'Audience Choice Award for Best Film' at MAMI in Mumbai.  Immediately after, Road to Sangam also received the 'Best 1st film of the Director Award' at International Films Festival of South Africa. Third award came as the 'Best Feature film Award' at the Radar Hamburg Film Festival Germany.

'Road to Sangam' is a film woven around a crucial fact about the last journey of Gandhiji. One of the urns with Gandhiji's ashes is discovered locked and forgotten in the locker of a bank. It is retrieved and taken to Allahabad for immersion. A simple God fearing, devout Muslim mechanic named Hashmat Ullah (Paresh Rawal) is entrusted the job of repairing the old V8 ford engine of the truck, to carry the ashes. He is not aware of the historic significance, that earlier too, it had carried the ashes of Mahatma Gandhi in 1948, which were immersed in the 'Sangam' at Allahabad. Due to a powerful bomb blast in his area, Hashmat is sucked into the vortex of loyalty to the call of protest by his clan against police atrocities and on the other hand towards the man who had sacrificed his life for them.

Adds the director Amit Rai, "Road to Sangam is a simple story told very simply. All my artistes are very strong actors and they have brought all the characters to life. Story idea had come from a small article in one of the newspapers that had caught my curiosity. I am proud that the audience could connect and accept them as their own."

Even during its first public screening at CANNES, the audience had loved the film so much that makers had to arrange for second screening.