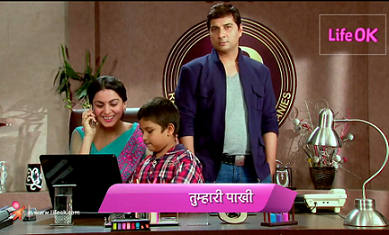 Life OK's show Tumhari Paakhi is doing extremely well to attract the eyeballs of masses. It is coming up with an interesting sequence where Paakhi will convey Riya to work by using reverse psychology.

In the last few episodes the viewers have witnessed that Riya is reluctant to accept Veer( Varun Badola) as her father so Paakhi (Shraddha Arya) is trying to solve the disputes between Veer and Riya. We have also seen that Paakhi and Veer have taken a step forward in their blooming friendship.

As per our sources, "Pakhi will use reverse psychology on Riya because Riya is a person who always does opposite to what she says. So Paakhi challenges Riya to work and make a name for herself. Riya will accept this as challenge and to prove Paakhi wrong she will take up a project of designing shoes. When Veer comes to know about this he calls for a celebration they go for having Pani Puri whereas Paakhi challenges for a pani puri competition against Veer."

Will Riya change after taking up work? Who will be the winner in the competition?

shanaya28 6 years ago This is the confident pakhi and she knows well how to deal with girl like Riya..She succeeded in making Ayaan a good boy ...no doubt in the end Pakhi will change Riya mindset about Veer..Shraddha..Varun both doing a fantastic job in TP...

Vinnie79 6 years ago Intresting track coming up. Hats of the the writers , director and Actor who are all doing a superb job. Happy to see a show tackling other life situations so maturely. Loss of a spouse, dealing with step kids in a normal way , tackling life's tricky situatons all handled very well. Keep it up Team TP ...

payal7 6 years ago This is show is showing how a show can be taken forward without the formulae driven usual triangle. How a new character can be brought in and make space for themselves.

Amazing writing is making the show fresh, interesting and a pleasure to watch

The actors are fantastic too.

keep up the good work team

piya- 6 years ago Just loving the way the story is unfolding in Tumhari Paakhi
It will be interesting to see hw paakhi bridges the gap between veer n rhea
Shraddha Arya and Varun Badola along with the whole cast are doing a great job. TP rocks

luvbbat 6 years ago Looking forward to watching this. Tumhari Pakhi is an awesome show and hats off to the creative team for coming up with such interesting tracks and of course to the actors as well.

ronshaan 6 years ago Tumhari paakhi is a great show , happy 2 see varun badola back on screen
all the writers and actors and all team of Tumhari paakhi are doing great job, i enjoy every episode