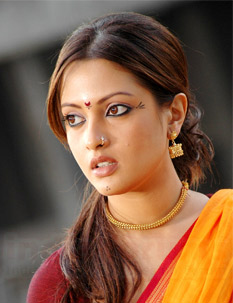 Featured Video
Maharashtrian sari in Gemini Studios' forthcoming film "Zor Lagaa Ke…Haiya",in which she plays a village belle, a construction worker in the film.
Riya Sen grabbed the role with both hands as she says, "I always wanted to play a village belle".

Producer Kartikeya Talreja says, "Riya was a bit reluctant, but when we explained to her how it will be a good change for her, she agreed to do the film."

Did she meet some construction workers to learn their mannerisms and behaviour? "I have seen them all my life", Riya says.