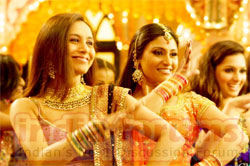 The one film that Rituparno Ghosh was looking forward to was 'Laaga Chunari Mein Daag' and he saw it all alone in a theatre in Kolkata.

'I had told Pradeep Sarkar I want to see the first print the minute it was out. He invited me for a show in Mumbai and when I was there, I had no time. The minute I landed in Kolkata on Friday afternoon I went straight for the first show of the film at a suburban theatre from the airport with my luggage.'

Instead of asking someone to accompany him to the theatre, he went solo to watch the Rani Mukerji, Konkona Sen Sharma and Abhishek Bachchan starrer.

'I had reserved two seats in the Kolkata theatre from Mumbai itself. And I hate to go in company. The companion constantly interrupts my movie viewing. So I always prefer to go for all my movies alone. No one recognises me anymore with my bald head. This time I'm even more relieved that I went alone. I cried and cried throughout the first half. The tears would just not stop. Pradeep Sarkar has made an outstanding film. Rani is incredibly restrained.'