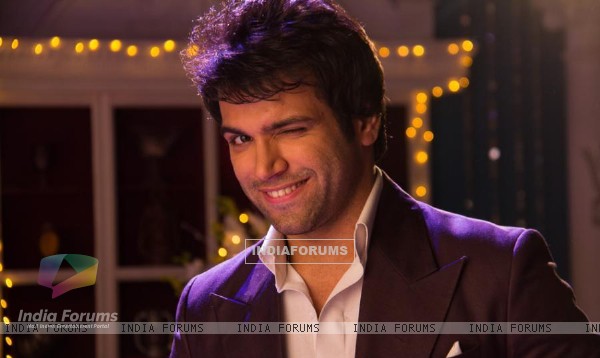 Zee TV's popular show India's Best Cine Stars Ki Khoj is heading towards its finale. To make this Grand Finale more happening, many popular celebs from the industry will be showcasing their talent on the stage and one such popular face is the popular actor Rithvik Dhanjani who is seen in Dare to Dance on Life OK as one of the contestant.

He will be seen doing a Tapori act along with Sayed Mamoom who is one of the contestants in Cine Star Ki Khoj.

We got in touch with the actor Rithwik to know more about his act and he says, "It was a very nicely written act depicting the tale of two friends of which one friend is trying to woo a girl and I am portraying the role of a younger brother of that friend. I am guiding him that bhai ladki aise nai waise pategi. I am helping my brother to impress that girl."

"While impressing that girl for my brother, I fall in love with another girl. The girl whom I love falls in love with my brother and breaks my heart. I go away with a heavy heart. So it's a very nice sweet and funny act. I really enjoyed working with Sayed and as I have worked there, I know what the result is. I feel that the decision is fair and the deserving contestant has won. I am really happy with the results," he further adds.

Talking about the unique show Rithvik says, "India's Best Cine Stars Ki Khoj is a very nice platform for the actors because many a time what happens is, when makers go to find actors they think of taking the person who is related to that actor like son, daughter, niece, nephew and so on. And because of this raw talent never gets chance in real life. Thus raw star is a pace where real talent comes out which is hidden in people from small villages and cities."

TellyBuzz wishes all the contestants of India's Best Cine Stars Ki Khoj all the best!

Ashi22 6 years ago Rithvik Dhanjani your performance was very good,

Anmol_. 6 years ago Thanks for the tb article but pls spell his name right- it's rithvik.
Love you a lot Rithvik Dhanjani stay blessed

.Nikki. 6 years ago Can't wait to see you perform there Rithvik Dhanjani!!

ampliphy 6 years ago Excited to see you perform Rithvik Dhanjani.

Candylicious 6 years ago Rithvik Dhanjani looking forward for your performance, you are going to rock it. You are the best and wish you more success

ampliphy 6 years ago Its always such a treat to watch Rithvik Dhanjani perform. Thanks for the article.

ashfaque2012 6 years ago Happy to know Rithvik Dhanjani perform this show grand Final. Proud of him