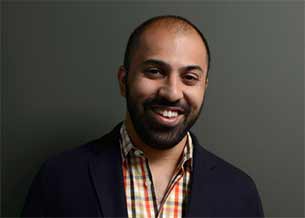 Ritesh Batra, who has been on an awards winning spree for his film "The Lunchbox", has been missing from the events. He says he was busy promoting the film in the US.

Sources close to the film aver that Batra was miffed at being largely ignored in the popular categories in favour of the critics' awards, but the director has an entirely different take on his absence from the awards functions.

"I was committed to doing publicity for the US release so was sad to not make it for the awards. But I'm very honoured by the appreciation. Glad that we were well represented by the cast, and also by my mom," he said.

After wowing movie buffs in Europe, "The Lunchbox" releases Feb 28 in the US.

"So far the reviews have been very positive. It feels good to see the film reach out to non-traditional audiences who normally don't want Hindi films," said Batra whose "The Lunchbox" opened in November in many European cities.

"We opened in Italy where the numbers of screens were doubled within a week," he said adding that in Germany the film is being shown on 100 screens.

"And in Switzerland, 'The Lunchbox' is in the Top 10 films of the country. It now opens in other countries like the Netherlands, Turkey and Poland," said the director.

Quite a unique space for an Indian film to occupy.

Ritesh agreed and said: "It's been an amazing journey for the film. The European audience has understood the film's context completely. The French media asked me amazing questions about the 'dabbawala culture' in Mumbai around which the film's love story is woven."

"The foreigners seem to have connected with the film's emotional epicentre wholeheartedly. I've to confess I never thought the film would go this far."

The director's most memorable moment during his European sojourn was at the premiere when a middle-aged lady came up to him after the film's screening and spoke to him.

"I didn't follow what she was saying in French. But she was obviously very moved. At the end of her emotional outburst she gifted me her scarf. And quietly walked away," he said.

Writing his next film seems burdensome with all the travelling.

"It's a slow process. I am not at any one place long enough to let the plot develop. Right now all I have is two characters, a man and a woman and a love story set in Mumbai," says Batra.

Ritesh Sidhwani Resumes Working at his Office with a Mask, Calls it ...