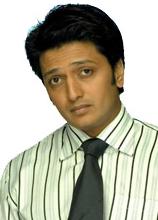 while confessing that he has come a long way from the quiet, reserved lad he used to be. One wonders if coming into tinsel town has brought about the change in him as seen today. However, even as the credit goes to Bollywood, it ages back to when the legendary DDLJ was released in 1995, and a younger adolescent Deshmukh was in his college years.


Watching SRK in the movie worked like a mantra from a 'Being Social' crash course! He found himself greatly encouraged about interacting with people around him (read: girls!) and he admits that in the one reforming stroke he had moved out of his lonesome shell. Or at least gained ample confidence to progress hence.


Said he, "College is  about romance and DDLJ made being in love, a lovely feeling. I was very shy, I neither had the courage, nor the charm to speak to girls. After watching DDLJ, I went from being an introvert to a people's person."


This, from that Bollywood's cute hottie Riteish Deshmukh, who's comic timing, natural wit and ease of bonding have been huge assets in allowing him to warm down into the industry and make his place. Who else to inspire a young boy in the 90's than King Khan himself!


The undeniable influence of media, one ought to see, can't always be for the bad!