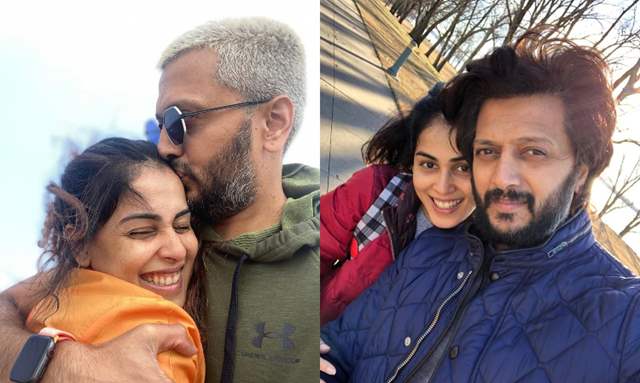 Riteish Deshmukh and wifey Genelia D'Souza (Deshmukh) are an adorable couple and even the netizens can’t disagree with it. The two have shelled out parenting goals for quite some time now, apart from that they are the cutest couple in tinsel town.

Today on the occasion Genelia’s birthday, Riteish took to his official social media handle and shared a picture of them and even penned heartwarming lines for wife on her birthday.

He wrote, "You are my bestest friend, my eternal laughter, my partner in crime, my happiness, my guide, my enthusiasm, my excitement, my light, my life, my everything. Wishing you a very Happy Birthday Baiko - growing young with you is a blessing. @geneliad #HappyBirthdayGenelia (sic)."

The lovely couple got hitched in 2012 and are living a happily married life with their two sons, Riaan and Rahyl aged 6 and 3 respectively. Apart from appearing in their debut movie, the duo worked together in movies like Masti (2004) and Tere Naal Love Ho Gaya (2012).

On the work front, Genelia has been absent from the big screen since her wedding. She has done some cameo appearances in films like Jai Ho (2014), Lai Bhaari (2014) and Force 2 (2016). While she ihas not been regularly acting, she produced a Marathi film Mauli in 2018.

Riteish Deshmukh, on the other hand, was last seen in Tiger Shroff's Baaghi 3. Directed by Ahmed Khan, the film was a huge box office success

'Kullfi Kumar' Fame Myra Singh To Make an Entry in 'Maddam ...
26 minutes ago