Mumbai, March 17 (IANS) A die-hard Rishi Kapoor fan, Deepika Padukone, the star of 2007 blockbuster 'Om Shanti Om', had to pinch herself when she met him - not as a fan but his son Ranbir's girlfriend.

'It's amazing. But in his younger days, my dad (badminton champ Prakash Padukone) was often told he resembled Rishi Uncle. I grew up as one of his fans, saw 'Karz' and 'Kabhi Kabhie' a number of times. When Ranbir took me to meet his parents, I was reliving my childhood images of the most compatible couple I've ever seen on screen.'

Ranbir's parents have taken to her in a big way. 'Rishi uncle is so warm. As for Neetu aunty, she has a natural grace and charm about her. She's very poised and articulate 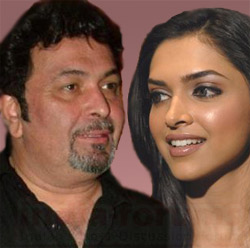 Featured Video
. I've met her many more times than I've met Rishi Uncle. We're going to be working together. We read a script together recently. He's so passionate about cinema. I've so much to learn from him.'

Deepika is full of praise for the Kapoor couple for their children's upbringing. 'Both Ranbir and his sister Riddhima have been brought up with the right values. They come from such an illustrious family and yet they're so down-to-earth. I see many similarities between their upbringing and mine. Though both Ranbir and I were exposed to celebrities from childhood, our parents have made sure we're firmly rooted to reality.'

So is she looking at a life ahead of Ranbir? 'Right now, we both have our careers to focus on. But we're both very comfortable in our relationship. Now that we've come out in the open about our relationship, our parents are very happy. Beyond that, it's too early to talk about marriage.'

Poised, in control of herself and utterly confident, the 22-year-old answers charges of unfair conduct levelled by cricketer Yuvraaj Singh's mother with elegant aplomb. Deepika was earlier linked to the cricketer.

'I really don't think she said anything against me. If she had a grudge, she would have called me. I always say no outside source can know what kind of relationship two people share.

'I spoke to her after the statements attributed to her came out. I've always shared a fantastic rapport with her. She's a wonderful and strong person. I've learnt a lot from her. As a woman, I look up to Yuvraaj's mother. She's a multi-tasking mother. She has single-handedly brought up her two children. Yuvraaj is doing extremely well for himself and his younger brother who has just started out is also doing very well. I wish the family all the best,' Deepika said.