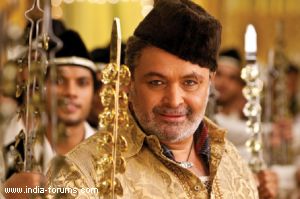 Mumbai, Aug 29 In his four-decade-long career in Bollywood, Rishi Kapoor never opted for 'look test' but insisted on it for 'Agneepath' to see how he looks on the screen in a negative character.

The 58-year-old is one of the villians in the remake of 1990's 'Agneepath' and wears kohl (kajal) in his eyes, a karakul cap and kurta-pajama to fit into the Muslim character.

'I have never given a look test in 40 years of my career. This is the first time and I had asked for it because I wanted to see how will I look on screen in this negative role,' Rishi said at a press conference here.

Initially, when Rishi was approached by the film's director Karan Malhotra, he was reluctant to take up the role originally played by Mithun Chakraborty.

'When I was approached first for this role, I was wondering how I could do Mithun's role and I was sure that I was not doing it. But when Karan narrated the script, I found the character very different from the original,' he said.