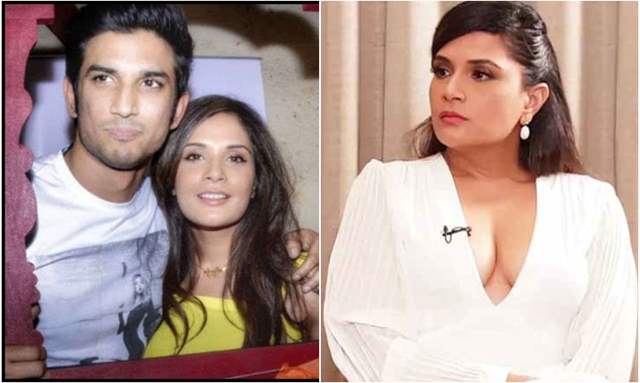 Besides an exceptional actor, Richa Chadha has a strong voice and makes sure to voice her opinion on subjects that matter. She is an avid Twitter user and does not shield away from stating hard-hitting facts, whenever possible. Sushant Singh Rajput’s untimely demise has led to an uproar on social media and the Bollywood industry including the star kids have come under the radar for their ‘privilege’ and the discussion around ‘nepotism’ is on an ever ending high.

Richa took to her blog to pen down an elaborate and intricate narrative that talks about the chatter around Sushant’s demise, Bollywood work culture, nepotism, privilege of star kids, the responsibility of film journalists and so much more that needed to be discussed.

Beginning her blog with Sahir Ludhianvi’s words, Richa shared a throwback picture with Sushant Singh Rajput and wrote, “There has been much chatter about nepotism and too little about what this environment can do to a person’s mental health. All this in the wake of a suicide by a beautiful actor who happened to be an old friend.”

“It is being said that the industry seems to be divided between ‘insiders’ and ‘outsiders’? In  my opinion the Hindi film industry and it’s entire eco-system is only divided between kind and unkind people” she wrote.

Speaking of how the industry operates like a food chain, she wrote:

“In the brief time that I have spent here as the first person of my lineage, my assessment is that the industry operates like a food chain. People are scoundrels when they know they can get away with it. Those who are anguished today have themselves been cruel to their subordinates. You hate your bully for not being ethical with you, while bullying someone working under you as though it is a rite of passage for them. This is an acceptable MO in this dog-eat-dog world. Not feeling remorse is considered a leadership quality., decency, sensitivity is considered a handicap.”

Sharing her opinion on star kids and their privileges, Richa says:

“As for nepotism, it just makes me laugh out loud in real life.  I don’t hate “star kids”.  Why are we expected to? If someone’s father is a star, they are born into that household the same as we are to our folks. Are you ashamed of your parents ? Is it right to expect someone else to be ashamed of their parents/families/legacy? This is a hateful and nonsense argument. I am a self-made person in this business. Will you tell my children to be ashamed of my struggle to reach where I have, for instance? ‘Star-kids’ have to deal with rivalry within their own clans.”

She went on to share an anecdote from the time when Sushant picked her up on a bike for her auditions:

“This takes me back a decade or so. Sushant and I started out by workshopping together in a theatre group. I was sharing a 700 sq ft apartment in Andheri West with a friend from Delhi. Sushant would pick me up on his bike and we would head to the rehearsal, for which I was grateful. I wasn’t poor or broke. But I can’t say money was not a consideration when I had to head out to do an ad audition for a skin brand. I would worry about my make up melting in the auto rickshaw before I even arrived. This was would NEVER happen with a ‘star-kid’, and if it does, they will be lauded for being humble enough to take the rickshaw in the first place. But I don’t resent their privilege.”

Reacting to the hateful comments Sushant’s friend are receiving after his demise, Richa says:

“I am surprised by our collective lack of dismay or shock at how low we have stooped in our discourse. The social media timelines of the deceased actor’s friends and girlfriend are littered with filth! Who are these ‘fans’? I checked out a few profiles online. The same gutter mouths that abused Sushant when he took a stand on the ‘Padmavat’ issue are now abusing his loved ones for ‘not being there’ for him.”

She also mentioned how the ones sharing condolences messages were once part of the bigger problem:

“Several directors were seen sharing condolence messages a month ago. So many among these have run down movies of their peers pre-release, have replaced actresses who refused to sleep with them at the last minute and several have in fact repeatedly forecasted ‘iska kuch nahi hoga’.

Richa concludes on a hopeful note that her perspective can bring about a discussion. “May this amateur perspective stimulate a long overdue and necessary discussion, because that is all I humbly hope to do here. May we open our hearts to bask in the light of another’s achievements, not relish their failures. Or else this stomping ground we have created will be responsible for trampling our existence.

As within, so without. If we keep calling the industry toxic, we must look for the source of these toxins. Look in the mirror and ascertain first that it’s not you” she wrote.

Who is AK in Sushant's Unseen Video that has Surfaced? Watch the Video ...