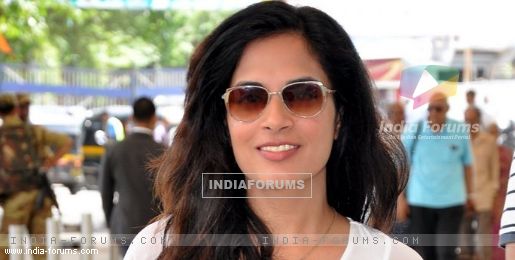 Richa Chadha's first look from Pooja Bhatt's upcoming film "Cabaret" has been unveiled. The actress is seen flaunting her toned body in a figure revealing outfit.

In the photograhs shared, the "Fukrey" star was seen wearing a black long skirt with thigh high slit revealing her legs. She teamed the skirt with a midriff revealing black top. The look was completed with a big maang tika and smokey eyes.

According to sources, Richa, who is currently in Jaipur shooting for "Cabaret", will soon be finishing her first schedule of the film.

"Cabaret", as the name suggests, is based on a dance, which Richa has been extensively learning and practicing for a long time. However, speculation is rife that the film is inspired by yesteryear actress and cabaret queen Helen's life.

Richa's character is a dancer from small town who goes has a dream to go big. According to Pooja, this film will give Richa a new image.

"Those who've dismissed Richa Chadha as 'un-glamorous' will eat their words," Pooja said in a statement.

Varun Sharma aka Chucha opens up on 'Fukrey 3'