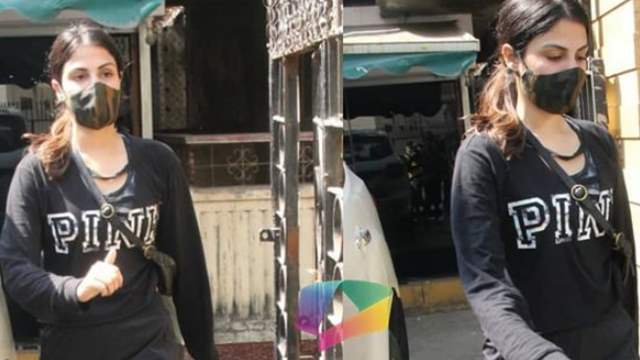 After a dramatic and intense series of events post Bollywood actor Sushant Singh Rajput’s demise, Rhea Chakraborty is getting back to normal life. Rhea, who was in a relationship with late Sushant faced severe media trials after she was accused of abetment to suicide, money laundering and consumption of drugs.

After several rounds of interrogation, Rhea and her brother Showik Chakraborty were arrested by the Narcotics Control Bureau under charges of procurement and consumption of drugs. The siblings are now out on bail.

Recently, Rhea and Showik have made frequent media appearances as they were spotted visiting their gym in Bandra. This is reportedly the same gym where Rhea used to work out with her late boyfriend Sushant Singh Rajput.

As soon as the cameras spotted Rhea leaving the gym, she made a quick exit and did not interact with the paparazzi.

Rhea is gearing up for her acting comeback as write - director Rumi Jaffrey had confirmed in an interview that the actress will be returning to the silver screen in 2021.

Rumi Jaffrey has also confirmed that Rhea’s upcoming film ‘Chehre’ with Amitabh Bachchan, Emraan Hashmi will be hitting the theatres this year.