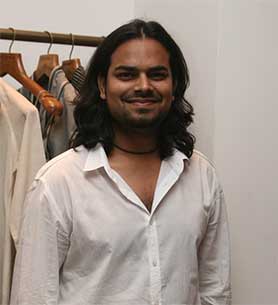 Designer Rahul Mishra, who is the first Indian to win the coveted International Woolmark Prize (IWP) in Milan, says it is a blend of "deeply rooted Indianness" presented with a modern approach which will drive budding designers to global visibility.

Mishra was announced the winner of the 2013-14 (IWP) during the final awards event held at the Triennale Museum Friday.

The Delhi-based designer sounded excited and emotional as he spoke to IANS following his victory at IWP, where international icons Yves Saint Laurent and Karl Lagerfeld have won in the past.

"I think at this moment, it is going to inspire numerous aspiring designers of our country to choose a path which is deeply rooted in Indianness, but modern in totality," Mishra said.

His Merino wool collection, which won the prestigious award, attempted to portray the journey of human race and the process of metamorphosis that our planet has undergone in the last century.

The feeling of victory is still sinking in for the designer, who says he got emotional soon after his name was announced.

"It feels amazing...it is so surreal and it is still sinking in. It's like winning at the Olympics! I had gone as an underdog. I am very proud that I could show a new side of Indian fashion and represent India's craft at the highest level.

"These 30 minutes (of presenting my line) in my life have redefined my own brand as well as my support system in terms of handloom and handicraft. I am a very proud Indian now because I could showcase the true India in front of so many people and while competing with the best talents in the world," he said.

Chung praised his designs for being "delicate and beautiful".

Mishra was chosen to compete at the event following a global search, reaching across 20 countries and involving over 48 designers.

Five talents, including Mishra, reached the final round. He competed against contestants - ffiXXed (Asia), Christopher Esber (Australia), Sibling (Europe) and Altuzarra (US).

Alongside prestigious recognition, the winner receives a financial contribution of AU$100,000 (over Rs.5.4 million) and the opportunity to be stocked in important retailers around the globe including Harvey Nichols, Saks Fifth Avenue, 10 Corso Como, Joyce, David Jones, Colette and mytheresa.com.

Mishra, a post-graduate from the National Institute of Design, where he won the best student designer of the year in 2005 and a scholarship to the Milan Istituto Marangoni, made his big ramp debut at the Lakme Fashion Week in 2006 when he created reversible ensembles with cotton handloom from Kerala.

Apart from Indian fashion weeks, the designer has also showcased at fashion weeks in London and Dubai, as also in Australia.