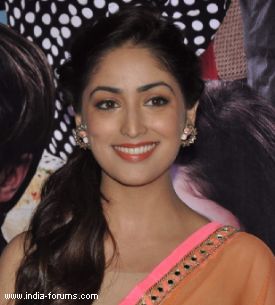 Actress Yami Gautam is thrilled with the response that the trailer of her next film "Total Siyapaa" is getting online. She says it's the biggest encouragement for her.

Now she is looking forward to the audience's reponse to it when the film will come out Jan 31 next year.

The trailer and first look of the romantic comedy was released last month and it features Pakistani singer-actor Ali Zafar with Yami. Directed by E. Niwas and written by Neeraj Pandey, "Total Siyapaa" is the love story of a Pakistani boy and an Indian girl.

"I am very happy with the kind of response the trailer of the film ('Total Siyapaa') is getting online. That's the biggest encouragement. The response to the film's trailer is very encouraging," Yami said here Tuesday at the launch of a magazine.

"I am really looking forward what kind of response the film will get. We have watched the film and have liked it," she said.

The "Vicky Donor" actress says it was an "absolute delight" to work with a director like E. Niwas and a writer like Neeraj Pandey.

Meanwhile, Yami is looking forward to her another project "Action Jackson".

"For 'Action Jackson', I am going to start shooting this month (December). I am very excited to work with Mr. Ajay Devgn. Prabhu (Prabhudheva) sir will direct it," the 25-year-old said.

Slated to release April 11, 2014, "Action Jackson" features Ajay Devgn and Sonakshi as the lead pair, while Yami will feature alongside Kunal Roy Kapur in the film.