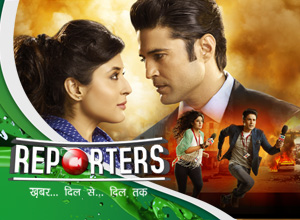 Ankita Bhargava's entry in Sony TV's Reporters have surely brought in a big twist in Kabir (Rajeev Khandelwal) and Ananya's (Kritika Kamra) on-going love story.
While we have seen how Shreya (Ankita Bhargava) gets annoyed watching Ananya and Kabir's closeness which affects Ananya's promotion at work, there awaits another turbulent situation in the upcoming episodes.
Now, Kabir will throw a party to cheer up Ananya. But will this settle all the misunderstandings between her and Kabir?
Let's find out!
A little birdy under the honey's hat tells us that Shreya will end up finding the whereabouts of the party and will create a misunderstanding between Richa (Shivangi Verma) and Ananya which will lead to a big fight and chaos at the party.
So what happens next? Party over?
A source informs, "Yes, an angry Ananya will then leave the party and reach home only to find Shreya waiting for her. She will then question Ananya about her relationship with Kabir."
Will Ananya be able to save her turbulent relationship with Kabir? Will she get a promoted at work?
Stay tuned!
Shachi Tapiawala Rathod

5 years ago Reporters rockss!! Rajeev Khandelwal and Kritika Kamra are awesome as Kabir and Ananya..love KaYa

+ 4
5 years ago Rajeev Khandelwal is the best!! He looks amazing with Kritika Kamra...

Love you Reporters for being such a unique show :)

5 years ago Till now, I have seen a lot of drama in the show but above all i like the sense of sanity a lot. They show what really can happen. Really life incidents, that happen a lot. I so like Kabir and Ananya's character. Before this, I haven't seen any other show of Kritika Kamra. I used to watch Kuch Toh Log Kahenge for just 2 or 3 episodes. But Reporters really got me addicted to it. So cheers to all the team! :) Hope we get a blast and I'm loving the current track. Good luck for future and take care ;)

5 years ago
Reporters rockss!! Rajeev Khandelwal and Kritika Kamra are awesome as Kabir and Ananya..

5 years ago Very eager for this
Richa ne aisa kya kaha ki Ananya ko itna gussa aa gaya?
Well, she doesn't need a reason to speak against Kabir '
Shreya questioning KaYa relationship
I hope Ananya kuch galat na soch de, but I would want ki at least ab usko lage ki she needs to know about Kabir's past
Rajeev Khandelwal and Kritika Kamra are being so wonderful as KaYa
I'm beginning to like Ankita Bhargava as Shreya too
Shivangi Verma is also good being the annoying friend Richa

5 years ago Reporters rockss!! Rajeev Khandelwal and Kritika Kamra are awesome as Kabir and Ananya...and also Anita Bhargava as Shreya...

5 years ago Love u Rajeev khandelwal , kritika kamra and Reporters.