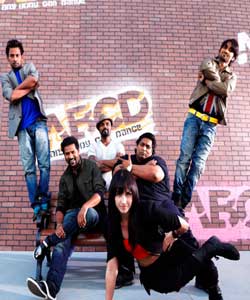 Mumbai, March 6 (IANS) Remo D'Souza's ambitious project, "AnyBody Can Dance" (ABCD), India's first dance film in 3D, has gone on the floor and the choreographer-turned-filmmaker says it is like fullfilling a long-cherished dream.

"It is like a dream coming true for me. I had always nurtured the thought of making a film on my passion - dancing. ABCD is a culmination of multiple dreams actually for me - I get to make a dance film and get the one and only Prabhu Deva to dance and act in it..," D'Souza said in a statement.

ABCD, being produced by UTV Motion Pictures, will have known choreographers like Prabhu Deva and Ganesh Acharya as part of its cast. While Lauren Gottlieb, the global winner of the popular television talent shop "So You Think You Can Dance", has been roped in as the female lead.

"We are thrilled to kick off one of our most exciting projects to date, ABCD (AnyBody Can Dance), India's first ever 3D dance musical. It has always been our endeavour to bring audiences movies that are different from the tried and tested, and with ABCD we believe we're pushing the boundaries of innovative content," said Siddharth Roy Kapur, CEO of UTV Motion Pictures who is producing the movie.

Sachin-Jigar has been roped in as the music composer and the film is set to release by the end of 2012.

aayuvi143 8 years ago cool !! i m so desperate to watch dis movie atually..its gona rock m sure :) bt also wanted to see raghav der ...i thought remo sir also gona take him in ABCD :(( and as people saying i will also not like dat forengier girl :(

Ruhhee 8 years ago Yea ver true yyy choose a firangi female wen there are loads of our desi girls that can dance n luks better...pleas Remo have a think abt ittt n c for urself

palma0211 8 years ago great but why do they always choose weird looking female foreigners for movies???she is a great dancer but look wise she will not work for indian audience..

ASRkiMoonlight 8 years ago Its the DID Salman Khan, not the actor!
where is he?

SandCastle. 8 years ago He is the BEST amon the DID Judges ! Love ya Remo, Keep Rocking & Shining, deserve it :)