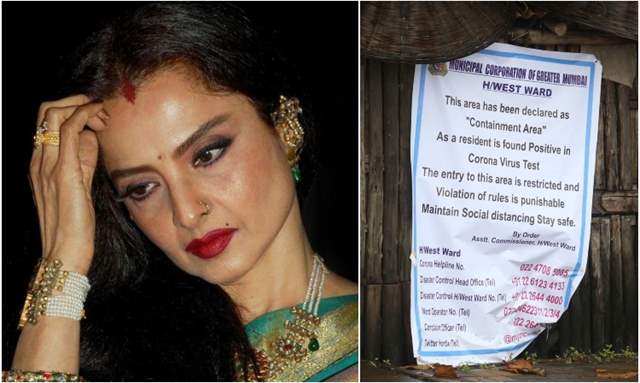 On Saturday, Bollywood’s Bachchan family got hit by the novel Coronavirus. Amitabh Bachchan and Abhishek Bachchan took to social media to announce that they had tested positive for COVID-19 and are currently admitted to Nanavati Hospital in Mumbai. Besides, Aishwarya Rai Bachchan and daughter Aradhya also tested positive and have been suggested home quarantine. Jaya Bachchan tested negative.

On the same day, it was reported that actress Rekha’s security guard tested positive for Coronavirus. After one of the guards turned COVID positive, the actress’ bungalow in Bandra 'Sea Springs' had been sealed by the BMC. Her bungalow was also declared a containment zone by the Brihanmumbai Municipal Corporation (BMC).

Following the guard’s positive report, Rekha along with her manager Farzana and three servants was to undergo tests for Coronavirus. However, as per a report in India TV, the actress refused to get tested and when the BMC team reached Rekha’s house for the same, no one opened the door.

The report stated that after the BMC team reached Rekha’s residence, no one opened the door. After some time, her manager inquired from behind the door and when the BMC officials answered that they were here to take the test, Farzana said, "Take the number, call me, and then we shall talk." However, the BMC team had to return without taking the tests.

The report also added that Chief Medical Officer of BMC H West ward Sanjay Phude said that they called up the actress’ manager once again. To which, Farzana replied that Rekha is fit and fine and she informed the BMC team that they haven't come in contact with anyone.

However, the officials asserted that it was mandatory for Rekha and her staff to undergo tests as her security guard had tested COVID Positive. Furthermore, the BMC also sent a sanitization team to Rekha’s bungalow, but they were yet again not allowed to enter the house.

Reportedly, the sanitization team had reached Rekha’s bungalow to sanitize her home from the inside, but upon arrival, no one answered the door. Thus, the team sanitized the actress’ house from outside and the surrounding areas and returned back.

The Bhatts were involved throughout: Ankit Tiwari on his ...
25 minutes ago