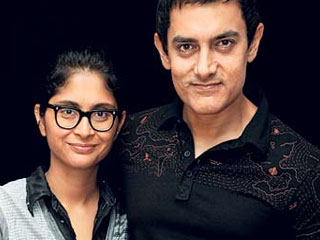 Filmmaker Kiran Rao, who is a hands-on mom to her son Azad, is all praise for her husband Aamir Khan's ex-wife Reena's parenting skills.

Aamir and Reena together have two children - son Junaid and daughter Ira, with whom even Kiran shares an amicable relationship.

"Reena is just wonderful and she has just done such a great job with these kids. They are super kids. I lucked out. I got Aamir and I got a great package deal with this super family," Kiran said during a tete-a-tete with Karan Johar on his chat show 'Koffee With Karan'.

Aamir ended his 15-year-old marriage with Reena in 2002 and during the shooting of Ashutosh Gowariker's 'Lagaan', he and Kiran, who was working in the film as an assistant director, ended up being together. They tied the knot in 2005.

Kiran and Aamir welcomed Azad Rao Khan via surrogacy in 2011.

Kiran says when she first met Junaid and Ira, 'they were quite young'.

"Ira was a little girl and we became friends instantly. They are very intelligent kids, very perceptive and they quite instinctively knew that I was a friend. That I was going to come into their life, more in that capacity... I think I am very lucky.

"Even if we had not had Azad, I would have felt really complete because of Junaid and Ira," she said.

The 'Koffee With Karan' episode featuring Kiran and Aamir will air on Sunday 9 p.m. on Star World.

Sonal99 6 years ago Response of the ex having brought up well behaved children is so cliched. What other comment is there left to say?
Kiran the children had no choice but to accept you.
So what if Aamir got married when he was young and now he has matured and he suddently realized that he did not like get along with his wife. He did not think he was young to have kids with Reena or have affairs and impregnate other women?
As if that was not enough, Kiran decided to bring another child into an already complicated family. So why would her child have the luxury of not having to move bedrooms and Reena's children have to just so they can spend time with their father.
Aamir like a spoilt child, got what he wanted - the best of everyhting and the wives and the children left to compromise.

berrysweet 6 years ago None of our business what they do with their personal lifes, but it would have been less crass if this lady did not talk about his ex. She was only praising his ex but she came across as someone who was trying too hard to be benevolent. Poor woman!

nicegirl_good 6 years ago What a Homewrecker she should be ashamed to even appear on tv and talk crap ! I hope reena slaps her someday

rima 6 years ago How can anyone question Aamir for his personal life? How do people know what goes on in the 4 walls of a house? What miserable lives people lead. So Slaman Khan is allowed to change one girlfriend every year, kill innocent pavement dwelers and black bucks SRK is allowed to have rumoured affairs while he is still married, but Aamir who reletenlessly works for the society and doesn't even take ads which do not contribute to society of late, who is UNICEF ambassador, who is the best actor, is accused of cheating on his wife? Why is not possible to fall out of love if people fall in love? Why should people be tied to loveless marriage for society. Due to people who judge and condemn thousands of people go through abuse and mental torture within their homes. It takes courage to step out of failed relationships and build new ones if there is nothing left. How can people know the pain of the one who is going through hell? As far as I am concerned Aamir is and always will be a great human being and actor. And Kiran did nothing wrong if Aamir's marriage was already dead. Reena was left holding the babies, but then she has the chice too if she wants. Unfortunately Indian woman do not opt for second marriages. That is the sad part. Otherwise the only thing needed for loveless marriage is for people to move on and stop hurting each other daily and live for society and kids.

Addictedlove 6 years ago Well reena and amir took a wise decision. When there is nothing left in marriage u opted out n I always adore reena.. I see its as young Kiran.. She has too much influence of Kiran.. Love u amir u r a great human being..

Ruhhee 6 years ago Dont know may be Reena wanted to part ways as well but i like her too she is a strong woman.

NiharikaMishra 6 years ago Friends I would really like to differ with many of you in this opinion.
Just based on what my parents tell me about the kind of love life Aamir had with Reena it seemed like romance of neighbours-cum-college mates who infact eloped with each other to be together and their marriage was off the eyes of media for quite some years, almost shocking the fans when it got revealed.

Considering they were quite young when they got together, it may have been the case that their preferences changed as they got older and more mature.

Aamir never dumped Reena or walked out of the marriage, they chose to separate with mutual consent. So this can never be termed as losing your husband thingy.
Gossip columns were already reporting news of their marriage being on the rocks long before Aamir interacted with Kiran.

And choosing to stay together only for the sake of kids is like making a compromise which will neither benefit the couple nor the kids in the long run. You should only choose to stay in a marriage if you really wish to make it work and for no other reason.
We can take the example of SRK whose marriage is still going strong due to mutual effort of both partners.

And Aamir being a follower of Islam could have easily chosen to keep both as wives if it would have been Kiran as the reason for the split.

I am no personal appreciator of Kiran nor I have anything against Reena but I really appreciate the fact that everyone there takes it sportingly there and relationships are not as sour as they should have been.

dilkhushme 6 years ago And to think Reena lost her husband, a long stable marraige and both of her kids. She's literally on her own with NOTHING to herself. They should've talked out things atleast for their kids who were so young and okay if things dint work out atleast let her have her kids and give her a reason to live through all of it ! And she's happy here with "package deal thingie" Selfish much ? :/

PSharada 6 years ago Though Aamir is a great actor and he seems to be happy with Kiran, I can't but feel sad for Reena - the lady stayed with him when he was nobody, stood by his failures/success and was a morale boaster in all ways and mom to his 2 kids. I don't say that you should stay stuck in a marriage but leaving someone who stood by you for 20 yrs for another person is not a good thing. If Reena also had someone in her life, I wouldn't have felt this bad but looking at her being alone and single handedly raising her kids, makes me feel bad for her. Out of the 3 people involved here Reena/Aamir and Kiran only Reena is the loser.