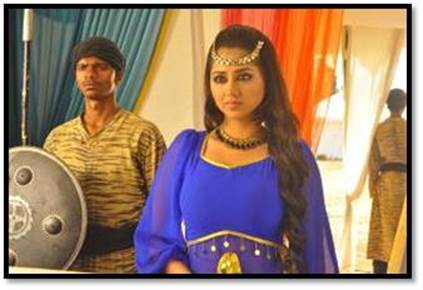 Sony Entertainment Television's popular show Maharana Pratap has been churning out some really exciting twists and turns. And soon, the viewers will get to see a twist, where one of the popular characters in the show, Gauhar Khan played by Reema Vohra, will meet its end.

The talented actress who was portraying the role of Gauhar Khan accompanied by Rao Surtan (Aanand Goradiya) to kill Pratap will be shown dying.

With the show coming up with more interesting and exciting episodes in the coming days there will be a lot of changes in the offing. Gauhar who was appointed by Akbar to kill Pratap will deliberately bring Pratap (Faisal I Khan), Phool (Jaannat Zubair Rehmani) and Ajab De (Roshni Walia) from the way where Akbar is waiting. A major face off is commenced between Akbar and Pratap. On the other hand Gauhar tries to push Ajab De and Phool but the twist in the tale arises when Gauhar dies from falling off the clip while trying to push girls.
15 Likes

_GurIkaholic_ 6 years ago Hope we get buzz points for this article TB .

Sizzling_Sia 6 years ago Love praja
Hope to get lots of praja scene this week.

_GurIkaholic_ 6 years ago Roshni Walia and Faisal Khan are doing great as PrAja . Love them.

_NeverMind_ 6 years ago Maharana pratap is the best .
Love its whole cast .