2008 has been a year filled with many ups and downs for Bollywood! Starting with a super hit like Jodha Akbar gave the year a jump start but unfortunately many duds like Sunday, One Two Three and Tashan followed! The recent Jaane Tu Yaan Jaane Na has been a huge blockbuster hit while Kismat Konnection may have received average reviews but the film has performed decently well in many areas.* Saif Ali Khan, Katrina Kaif, Bipasha Basu and Akshay Khanna starrer Race in the beginning of the year provided a breather in between the flops while U Me Aur Hum and Jannat were also average fares. In comparison last year had seen back to back hits like Namastey London, Cheeni Kum, Partner, Guru, Chak De India, The Namesake and later on films like Bhool Bhuliya, Jab We Met, Om Shanti Om, Welcome and Taare Zameen Par. Unfortunately this year just does not live up as the list of hits is small while the list of flops just does not seem to end! Even big star cast movies like Bhoothnath and Thoda Pyar Thoda Magic have disappointed audiences. 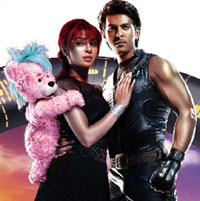 Featured Video
So what are the reasons for the flop movies? Well starting with the recent Love Story 2050 – a new star who supposedly resembles Hrithik Roshan has tried but failed to copy the superstar who has given huge hits like Jodha Akbar, Dhoom 2 and Koi Mil Gaya. And then imagination is one thing but in 32 years we will have time machines, talking and working bears, robots, id chips etc – wowwww, isn’t that stretching one’s imagination a bit too much? Lets not talk about 2:35 hr torture anymore which had a bad script and the lead actor Harman definitely needs some polishing. Moving on to the comedies of the year, “Krazzy 4” and “Sunday” had no good humor and were not all funny. “Halla Bol”, “Superstar”, “Bombay to Bangkok” had bad music and scripts while “One Two Three” – was another pathetic film and Paresh Rawal selling undergarments.. no comments!!!!

The biggest flop of the year was hands down “Tashan” followed by Jimmy, the debut of Mithun Charkraborty’s son Mimoh tied with films like “Haal-E-Dil”, “Dhoom Dhadaka”, “Mr. White Mr. Black” and the recent “Money Hai Toh Honey Hai” and “Mission Istanbul”. You can’t stop yourself from thinking, what has happened to Bollywood? Horrible scripts, below expectation story lines and at times poor acting has led to so many duds this year!

After the increase in inflation of about 11.49% who would like to buy a ticket worth Rs 100 to 300, to watch only flops like Tashan, Thoda Pyar Thoda Magic, Bhoothnath, Jimmy and Khusbhoo?

NOTE: The views expressed in this article are solely of the author!