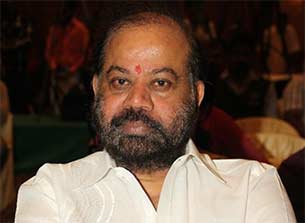 Tamil filmmaker P. Vasu, who has been chosen to helm the yet-untitled Kannada remake of recent Malayalam blockbuster "Drishyam", says it was senior actor Ravichandran who referred his name.

"I loved the film, but even before I thought of remaking it Tamil or Telugu, I realised that the remake rights were sold and even its principal casting was finished. However, when a production house called me to direct the Kannada version of the remake, I was up for it," Vasu told IANS.

In the film, Kannada film veteran Ravichandran will reprise the role that Mohanlal played in the original. Vasu says it was Ravichandran who referred his name to the producers.

"Ravi had referred my name to the producers. We've known each other for a long time and he wanted me to direct it. He was also prepared to direct it himself if I was unavailable. But luckily, I'm not occupied with any other project," he added.

A family thriller, "Drishyam" tracks the story of a father's efforts to cover up a murder committed by his family. The film has emerged as the biggest hit in Malayalam filmdom.

Mohanlal and Meena played the lead roles in the original.

"We will start casting process soon. We are planning to take the film on floors by March," said Vasu, who is known for such works as "Chandramukhi", "Walter Vetrivel" and "Sethupathi IPS".

Vasu has directed Kannada films such as "Kathanayaka", "Jayasimha" and "Jeevana Jyothi" in the past.

"Drishyam" is now being remade in all three southern languages. While Kamal Haasan will be playing the lead in its Tamil version, Daggubati Venkatesh will feature in the Telugu version.