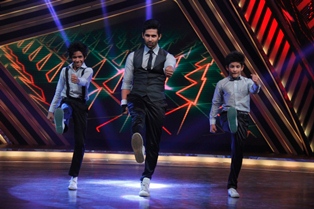 Sargun Mehta's stint as an anchor on Boogie Woogie Kids Championship is under threat from none other than the love of her life husband Ravi Dubey. Now before you have your grey cells running, here's the complete story.

The upcoming episode of Boogie Woogie Kids Championship will witness the popular faces of the television industry set the stage of fire as they shake a leg with the little dancing stars of the show. Sargun's beau Ravi Dubey will also be seen performing with Sachin and Sagar on the song Ahun ahun ahun.

The judges will be super impressed by his scintillating performance. Later, Ravi will be seen mimicking Hrithik Roshan and rapping like Javed Jaffrey. The judges were so enthralled by his talent that they promised Ravi to consider his name for anchoring in the next season of Boogie Woogie.

Looks like Sargun's got some tough competition at home!

7 years ago No I like Sargun as a host! She's the best!