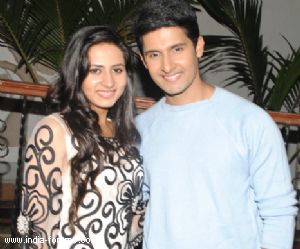 Ravi Dubey and Sargun Mehta will be seen performing on the same stage but this time not together. The duo will be competing with each other on Sony TV's show Boogie Woogie Kids Championship.

Sounding excited for his performance, the talented actor Ravi who is all set for his hip-hop performance and also appreciates the kids on the show says, "Yes it was a good fun to perform with small kids. We will be doing a hip-hop form but I must say that these kids are so better. They are doing stunts too in the dance performance."

Ravi's wife Sargun who is anchoring the show Boogie Woogie Kids Championship, will also perform giving a tough competition to her husband's team. When asked Ravi about the same he says, "Yes and I'm sure that it's going to be interesting to see Sargun dancing in her own show as she is anchoring the show too. We had a lot of fun."

Sargun's experience of dancing on the show was quite good as she says that it was great fun, "Yes, it was a great experience. The producers Javed Jaffrey, Naved Jaffrey and Ravi Behl wanted me to perform because Ravi was doing the same. Initially, I was bit reluctant as to how will I anchor and perform in the same show, but they insisted me to do it and asked me to perform. I'm sure that the audience will love us because it's going to be a kaante ki takkar between Ravi's team and mine."

We wish Ravi and Sargun all the best for their performances.