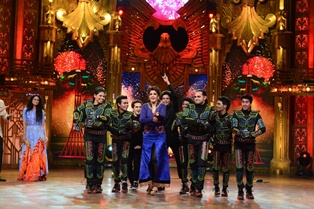 The entertainment quotient on the sets of Sony TV's Entertainment Ke Liye Kuch Bhi Karega reached newer heights as the ever gorgeous Raveena Tandon amazed one an all with her pagalpanti. EKLKBK will witness the beautiful actress Raveena Tandon making an appearance on the show as a guest judge, filling in for Farah Khan.

Raveena will be seen having a gala time on the sets with hosts Mona Jaswir Singh and Krushna Abhishek and judge Anu Malik.

A delighted Raveena said, "I am a big fan of Anuji and thanks to him for giving me most of my hit songs."

She will also groove on the stage with the contestants on her famous songs like Ankhiyon se goli mare' and Kya lagti hai haye rabba'.

That's not all! Inspired by a young girl Raveena will also shock everyone by performing dangerous sword stunts on the stage.
0 Likes

Mona Singh on Having Frozen Her Eggs For Future Child