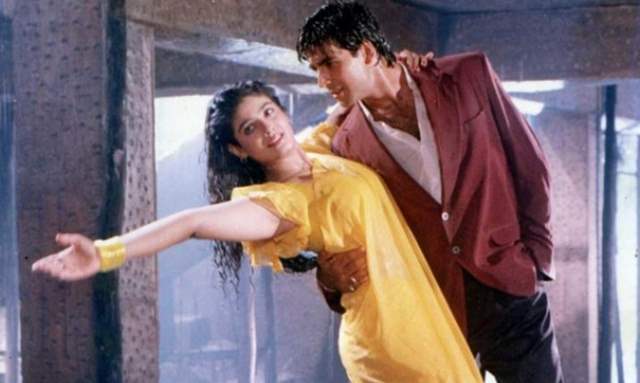 The iconic song Tip Tip Barsa Paani is still known to be one of the best-choreographed songs of all time and fans tend to hum this song as soon as the beats land on their ear-drums. However, creating an original and iconic song is never easy, and there are a lot of factors that go into making such an admirable song. But now, actress Raveena Tandon has made a shocking revelation that is bound to shock the fans.

Raveena admitted it wasn’t an easy task to shoot the song. While dancing in water wasn’t difficult enough, Raveena recalled the obstacles she had to face during her performance.

In an interaction with Pinkvilla, the Mohra actress revealed that the song was filmed over four days, on a construction site and there were rocks and nails lying around, and she had to perform barefoot. During the shoot, Raveena reportedly caught fever as the song required her to be drenched, and the water used was very cold.

These problems were just the tip of the ice-berg and many more difficulties arose during the shoot. The actress added that she bruised her knees, and was on her periods while filming the song. She even wonders how the makers managed to make the number look as sensuous as it did.

For the uninitiated, Tip Tip Barsa Paani was a part of the 1994 film Mohra which starred  Akshay Kumar in the lead role. The number was sung by Udit Narayan and Alka Yagnik.

2 years ago Thats begs the question how did to manange to avoid showing spots. Main worty during rains for some women

+ 3
2 years ago First time saw the song with original leads..leave vulgarity and eroticism behind what about elegance women! U were crashing like a rock ...song & music is good!!

2 years ago Wow she was on her periods? Damn! Yet she managed to do such a wonderful job and this song remains evergreen! Beautiful song and beautiful video!