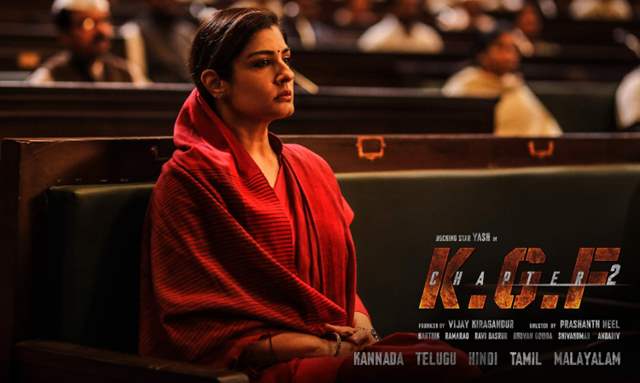 As the release date of KGF’s chapter 2 draws closer, fans are excited to watch the sequel of the much-awaited film.

Meanwhile, the makers of the KGF franchise have the best birthday gift for actress Raveena Tandon on her birthday. The actress turned a year older today and the director of the film, Prashanth Neel, took to his social media to wish the actress on her birthday and also unveiled a new poster from the film. He also revealed Raveena Tandon’s character’s name from the film.

Later, the actress thanked the entire team of KGF and tweeted the picture as she wrote, "THE gavel to brutality!!! Presenting #RamikaSen from #KGFChapter2. Thanks KGF team for the gift. #HBDRaveenaTandon

The 46-year-old actress will be seen playing Ramika Sen in the film. Going by her appearance from the poster, she looks absolutely fierce.

On the other hand, the KGF team recently revealed Sanjay Dutt's look as Adheera in the film. The release of Sanjay’s look created a massive buzz on social media and the makers of the film had also shared a new still of actress Srinidhi Shetty on her birthday.