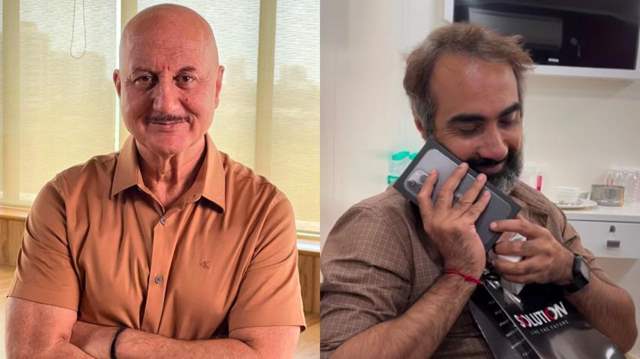 Bollywood actor Anupam Kher is an avid social media user. His social media handle is a collection of personal life moments, social opinions and updates, adorable videos of his mother, and a lot more. The actor's fans have a visual treat with all that's posted on Anupam Kher's social media.

Recently, the Kashmir Files actor took to his Instagram handle and has shared a video of Ranvir Shorey, wherein the latter is seen holding close a box of a brand new an expensive phone.

Ranvir said in the video that Anupam Kher gave him his "jaan" and "jigar ka tukda" as gifts. He also made fun of Anupam Kher, telling him to do special things for him every year. In the video, Ranvir Shorey gives his newest possession a heartfelt embrace.

Revealing the reason behind this sweet gesture Mr. Kher penned the caption as

“Dearest @ranvirshorey! You are hilarious! Thank you for agreeing to be part of our film #TheSignature in a special role. You were brilliant! As a token of appreciation for your graceful gesture I gifted you something you needed badly! I love our conversation! 😂😬🤪 #Friend #Actor #Humbled #KhoslaKaGhosla.”

Anupam Kher is indeed a man with a 'heart of gold' for such a delightful gesture for his co-star.

According to reports from Etimes, ‘The Signature’ is actress Mahima Choudhry’s comeback film. The team has been shooting in Lucknow and Ranvir had joined them for a cameo. ‘The Signature’ is produced by KC Bokadia. It was also stated that Neena Kulkarniwill essay the role of Anupam Kher’s wife in this entertainer.

+ 10
3 months ago Waah thats generous of Anupam Kher. Ranvir I liked him in Metro Park series.