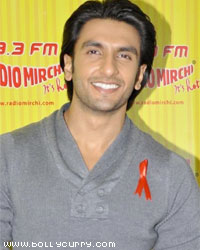 After creating waves with Band Baaja Baraat and Ladies vs Ricky Bahl, Ranveer Singh will be seen in the official remake of 2009 Telegu flick, Magadheera.
Earlier speculations believed that the cunning role would go to Hrithik Roshan or Ranbir Kapoor. However, producer Vikas Bahl confirmed that Ranveer was the perfect choice for the role. Singh is already said to be under intense physical training to best fit his character. The actor also wishes to reach out to Ram Charan, the male lead in the original Telegu venture for tips. The historic love story is estimated to have a budget of  Rs. 50 crore.
Will Ranveer be able to do justice to this role? Or were Hrithik/Ranbir better choices? Let us know in the space below!

Sara Ali Khan heads to Mumbai as she receives summon from ...
34 minutes ago

Bigg Boss 14: First look of the shopping mall, theatre and ...
43 minutes ago