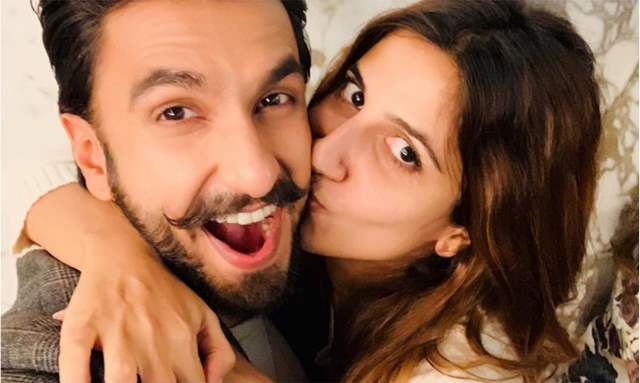 Bollywood superstar Ranveer Singh is a fabulous actor, and moreover has a heart of gold. Besides his professional brilliance, the actor knows how to prioritize his personal life well. He is often seen going out of the way for his friends and family, and his darling wife Deepika Padukone has often lauded him for his affectionate behavior.

Ranveer is a good friend and makes sure he is always there to help his friends in need. Recently, the actor’s special gesture for his childhood friend and designer Simone Khambatta has won our hearts.

The Gully Boy star has his calendars full as he is currently shooting for Kabir Khan’s ‘83. But, he managed to clear his busy schedule and decided to walk the ramp for Simone to support her. “Ranveer has been friends with designer Simone Khambatta since they were 11! They have travelled for trips together and she has been one of his closest friends growing up. Simone is a women’s couture/bridal designer and does bespoke menswear. Ever since Ranveer became a superstar, he has been constantly in and out of Mumbai for his film shoots and endorsements. He realized that thankfully he was in town on the day Simone was showcasing her collection at a two-day wedding (luxury) exhibition and he immediately told his team to clear out his calendar for the day so that he could walk the ramp for Simone and show his support for his dear friend! He wanted to be present at his friend’s special moment,” Bollywood Hungama quoted a close source as saying.

The report further quotes Ranveer’s bestie Simone as saying, “Ranveer and I go back and long way and we cherish our friendship that has stood the test of time to only grow deeper and stronger. I always knew that he would become a star given his swagger when he danced on Govinda songs on his birthday as a kid. Ranveer is always big on surprises and his decision to walk the ramp for me and be the show-stopper is one of the sweetest gestures that he has done for me. I’m truly touched.”

Besides, Ranveer too was all praises for Simone and stated that he is excited about the show. “Simone has a unique creative expression as a designer. Shes also been one of my closest friends growing up. I wanted to support her and celebrate her breakthrough moment in the world of fashion. We share fond memories of growing up together, and it makes me immensely proud to be a small part of her achievement. The show’s going to be fantastic and I’m looking forward to it,” the actor asserted.

Well, this is what makes Ranveer everybody’s favorite!

Ranveer will be seen playing the role of Kapil Dev in the sports biopic drama titled ‘83, and it is slated to release on April 10, 2020.

Ranveer Singh Opens Up on How Being Glued to TV shaped him: ‘When Kids ...