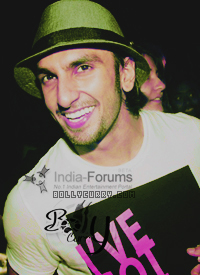 Ranveer Singh, the one boy wonder of Band Baaja Baraat fame, might have impressed you in his debut film but in his next, he is certainly out to prove himself to be a tough competitor to the leading Bollywood actors.

In an era where all leading stars have been sporting 'six-pack abs' for their respective films, Ranveer too has joined the bandwagon. The actor has worked on his body for his forthcoming film, Ladies v/s Ricky Bahl with Yash Raj.
At a recent event, the chirpy actor revealed that he has shot many shirtless scenes where you can see him flaunting perfect six-pack abs. To get into the perfect shape, the actor had stayed away from all delicacies, putting himself on a strict diet, as well as working out for several hours in the gym.
The Ranveer Singh-Anushka Sharma starrer, Yash Raj film, Ladies v/s Ricky Bahl , will hit the screens on 9th December, 2012.

Jacqueline Fernandez was intimidated and nervous; Recalls times from ...