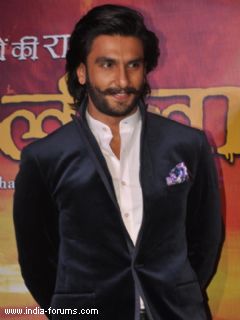 Actor Ranveer Singh is busy with a two-week campaign to promote his film "Ram-Leela" but doesn't favour extended campaigns as is now the norm. He hopes the scenario will soon change.

"If I had to set a trend, may be in the future when I will be little more established, I would want that an actor does not need to promote his film," Ranveer said here Monday during the promotion of the film at a radio station.

The young actor, who has carved a niche for himself in the industry with movies like "Band Baaja Baaraat" and "Ladies Vs Ricky Bahl", believes "people should just be on the film sets doing what they are here to do".

Ranveer is happy with the kind of buzz the film's trailer and songs have created.

"Fortunately, the promo material (of 'Ram-Leela') has done a good job for us. We both (Deepika and I) are on campaign for the last two weeks for the film. I think the buzz about the film is quite good and it is good for us," Ranveer said.

"It is a big release for me so I hope people get excited. I hope Nov 15 (the release date of of the film) proves to be a landmark day for me," he added.

Rakul Preet Singh confesses to being a part of drug chats ...
22 minutes ago