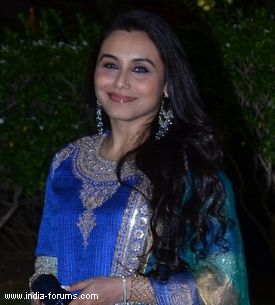 Actress Rani Mukherjee's comeback venture "Mardaani" seems to have hit a snag. Director Pradeep Sarkar was supposed to shoot at the Mumbai airport earlier this week, but permission is said to have been denied.

"Rani and her co-star Jisshu Sengupta were supposed to shoot a romantic scene on the Juhu beach early in the morning on Thursday. In the evening they were supposed to do a very emotional sequence at the airport. However, the airport sequence had to be cancelled because the necessary permission was not forthcoming," said a source from Yash Raj Films.

The sequence has now been pushed to March-end.

Video: Kangana Ranaut Escorted by a ‘Chain of Commandos’ on her ...