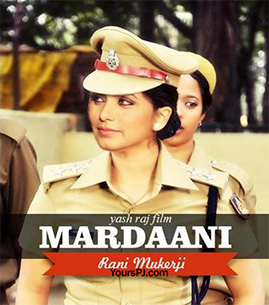 A quiet, leafy South Delhi neighbourhood was abuzz Friday morning as news trickled into homes and busy markets that Bollywood star Rani Mukherjee was shooting in one of the houses.

"Did you know that Rani is in Chittaranjan Park," squealed Manushi, a 20-year-old househelp, as she excitedly passed on the news on the phone to her friends in the neighbourhood - and beyond.

Rani is in the capital to shoot for "Mardaani". Being directed by Pradeep Sarkar and produced by Aditya Chopra, the film will see the actress in khakis.

Burly private guards, wearing black safari suits, cordoned off an entire area around a neighbourhood park, not allowing even househelps and courier boys to transgress the road leading to the house.

Many older residents were upset at this "unwarranted intrusion" into neighbourhood peace, but the younger ones revelled in a sense of pride of their neighbourhood being a location for a Bollywood film.

"Do you think they will show our park in the movie," one housemaid was overheard asking another. When an irate neighbourhood gent asked one of the guards on whose authority they were blocking off a colony road, one of them said: "Sir, we have taken all necessary permission and clearances, including from the resident association."

After an outcry in the media and complaints from citizens a couple of weeks ago over private guards blocking off busy arterial roads in East Delhi where Hrithik Roshan and Katrina Kaif were shooting and creating huge traffic jams, the shooting team appeared to be more circumspect this time and the guards were scrupulously polite in dealing with residents even while diverting people and traffic away from the location.

But the long line of vans and cars that make a production unit's cavalcade nevertheless created traffic choke points even as groups of people stood at various vantage points near the house and craned their necks to catch a glimpse of their favourite star.

"She was dressed in jeans-jacket and the onlookers were saying that she looks different off the screen," said Ramakanta Mahanta, an onlooker who got a glimpse of the actress of hits like "Saathiya", "Hum Tum" and "Black".

Shaheer Sheikh opens up on getting offers from Bollywood in ...
21 minutes ago

"This NEWS is FALSE, MALICIOUS & MISCHIEVOUS": Nikhil Slams ...
29 minutes ago