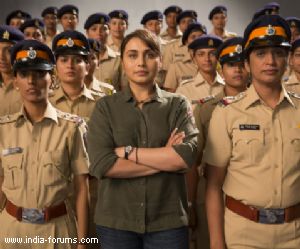 Rani Mukherjee who will be seen essaying the role of a cop for the first time in her upcoming film Mardaani has shot for a special national anthem video.

The actress will be featuring in the video singing the national anthem along with real cops. The cops in the video will be from a constable to the top most official in the hierarchy. The video will have Rani in normal clothes and all the office will be clad in their work uniform. Mardaani's director Pradeep Sarkar himself has directed for this song.

This special anthem video will be played in the multiplexes this Friday onwards with the release of Kick.

Pradeep Sarkar said 'Shooting the National Anthem with the women police force & Rani was quite an exhilarating experience. The Anthem itself gives you the goosebumps and on top of that the Women Power of India singing it all together makes you stand up in pride and salute the true Shakti present in all the Mardaani's of India'

The film will tackle the sensitive subject of human trafficking.